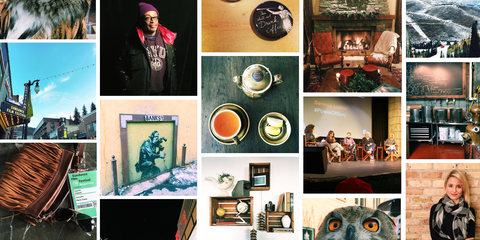 Over the weekend, we made the journey to the 2015 Sundance Film Festival and attended handful of amazing film premieres—stay tuned for our favorites—as well as a few fabulous parties. But just as importantly, we got to experience every bit the festival had to offer outside the theaters, from its bustling and star-studded Main Street to the homespun culture of Park City. Follow our photo diary below to see all our favorite moments, from celebrity run-ins (we see you, Dianna Agron) to hitting the snowy slopes of the Canyons.

All an editor really needs at Sundance is the essentials: a fringe bag, Ray Ban aviators, and a press pass.

A landmark of Main Street, the Egyptian Theater is one of Sundance's most famous spots. The first screening we saw there was Misery Loves Comedy, a hilarious documentary featuring Jimmy Fallon, Tom Hanks, and Lisa Kudrow.

Hitting the slopes in between screenings is an absolute must—and not just for après-ski's sake.We spent a gorgeous morning at the Canyons, one of Park City's most famous resorts, skiing and taking in the unparalleled mountain views.

After a few runs down the mountain, we had some piping hot Bombay chai tea waiting for us at The Farm Restaurant, where we ate a locally-harvested lunch.

Like many out-of-towners, we got to experience Park City like a local by staying in an Airbnb mountain house, complete with a light-switch fireplace and hot tub—two things that make unwinding after a long day at the festival pretty sweet.

It's impossible to get the authentic Park City experience without a night of revelry at High West, Utah's first distillery since the 1870s. During a whiskey tasting (our vote goes to the smoky Campfire blend), we got a behind-the-scenes look at the distilling process and now we know why it burns so good.

Weekend nights during Sundance are not for the faint of heart. The lit-up streets are insanely crowded, but unbeknownst to you, you're likely rubbing shoulders with all the movers and shakers.

Suffice it to say, a Spike Lee run-in isn't totally unusual on Sundance grounds. This snap finds the director making his "last expression before the world ends," as requested by a photographer. Man, can he keep his cool.

At Sundance, you never know what Banksy masterpiece is waiting for you around the corner.

Confirmed: Dianna Agron is even more beautiful IRL. We stopped by the Birchbox pop-up and chatted with the actress ahead of the world premiere of her new film Zipper, where she plays the object of Patrick Wilson's character's affection.

During one stroll down Main Street, we made the acquaintance of Pumpkin the owl. He's the face of  Earthwings, an organization that specializes in bird shows and plans to expand its educational mission and build a one-of-a-kind public wildlife center in Utah. Learn more about Pumpkin's cause here.

Each day, we'd pop into the Airbnb Haus on Main Street, which was not only filled with an assortment of curiosities (as pictured here), but was a gathering space for indie filmmakers, artists, and caffeine addicts who wanted their Four Barrel Coffee fix.

These little Four Barrel Coffee buttons were amongst our favorite souvenirs from the festival.

Of course we had to find time to hang out with Connie Britton and Molly Shannon at Grey Goose's party for their new film Me & Earl & the Dying Girl.

One of the highlights of the weekend was attending Planned Parenthood's Sundance cocktail, where Lena Dunham delivered a speech that was inspiring and hilarious in equal parts—not that we'd expect anything less.