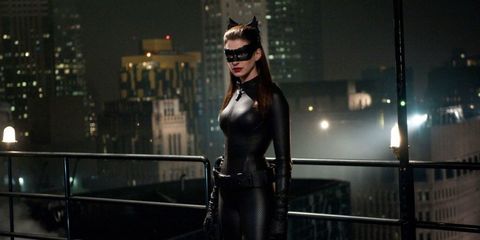 After 75 years slinking around Gotham, Catwoman has another surprise up her sleeve. In the newest comic starring the famously sneaky antihero, she's revealed to be bisexual. Me-ow!

Catwoman #39 writer Genevieve Valentine explained in a blog post that she wanted her current arc to establish Selina Kyle as "canon bisexual," making it (finally) official. "She's flirted around it–often quite literally–for years now; for me, this wasn't a revelation so much as a confirmation," she wrote.

The comic features Selina Kyle relinquishing the title of Catwoman to lead a crime family in Gotham; in her place, Eiko Hasigawa from her rival crime family takes the reins without Kyle's approval. But in a dramatic rooftop scene, the former and current Catwoman share a passionate kiss. "Was that for me, or the suit?" Hasigawa asks. "I don't know," Kyle responds.

Catwoman has been portrayed as a lesbian before, when Selina Kyle's sidekick Holly Robinson put on the suit. The comic even won a GLAAD award in 2004 for Robinson's storyline. But usually, Catwoman has been shown as heterosexual, and sometimes in a sexually charged relationship with Batman.

Valentine said that those ties to Batman aren't going anywhere, either. "Please be assured that Selina's longstanding connection to Batman has not been forgotten; that is not how bisexuality (or humanity) works," she wrote. "Selina doesn't care easily, but when she does care it strikes deep, and there will be plenty of that coming up."

The comic-book world has embraced LGBT characters in recent years. Batwoman was reintroduced as a lesbian character in 2006, the Green Lantern has been a gay man in the past, and a trans woman of color has recently been introduced as Batgirl. Constantine has also been depicted as bisexual in comics, but not in movie or TV adaptations until...soon, please?