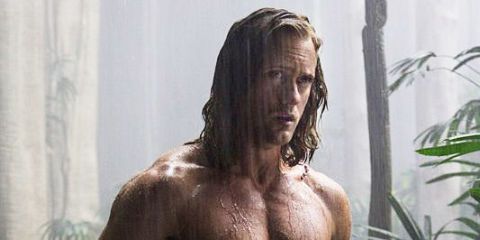 The whole point of Tarzan, basically, is that we civilized people are the *real* savages, which is not false, especially when you consider your own reaction to the below photos of Alexander Skarsgård's dewy eight-pack.

USA Today revealed the first official images of the Legend of Tarzan on Wednesday, along with the knowledge that the David Yates-led film will reverse the traditional jungle-to-Victorian-London story and begin with the protagonist returning to the Congo to save his home from Belgian imperialists. His wife Jane, played by a ginger Margot Robbie, will be as badass as ever, though, as a "really strong, assertive, beautifully knowledgeable, very sexy modern woman who can more than look after herself," Yates said.

Welcome back to the jungle, Tarzan. 'Tarzan' puts a twist on a legend https://t.co/X44TDFQARO Photo: Jonathan Olley pic.twitter.com/KKYj4iJquZ

Chelsea Peng I'm Chelsea Peng, the assistant editor at MarieClaire.com.
Advertisement - Continue Reading Below
More From Culture
Family Movies Both Grown-Ups and Kids Will Love
The Best Wedding Movies of All Time
Advertisement - Continue Reading Below
Read 'Anna K' Even If You Didn't Read the Original
19 Most Underrated Films of All Time
The Music Podcasts We Keep Pressing Play On
Why You Keep Seeing "Until Tomorrow" on Instagram
The 19 Best Murder Mystery Movies
How to Join Marie Claire's Online Book Club
'In Five Years' Is MC's April Book Club Pick
'Little Fires Everywhere' Is a '90s Time Capsule