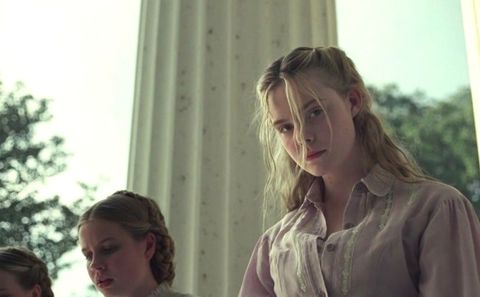 If you love movies about fleets of vaguely angsty women in rural settings wearing Little House on the Prairie outfits, The Beguiled is here to give you life.

Sofia Coppola's new film is about what happens when a wounded Union Army soldier arrives at a women's boarding school in Virginia. The movie has an all-star cast, including Kirsten Dunst, Elle Fanning, Colin Farrell, and Nicole Kidman. And based on the gorgeous trailer, we can expect tons of florals, tons of Southern gothic vibes, and tons of (vaguely sexy?) drama.

Get your exclusive first look at #SofiaCoppola's next project, #TheBeguiled. 🎬 Starring #NicoleKidman, #KirstenDunst, and #ElleFanning, the film explores the theme of isolated young women in an unexpected setting: a women's boarding school in 1864 Virginia at the height of the Civil War. 😯 “I haven’t really done a genre film,” says director Coppola. “It was fun to figure out how to approach that but still [keep the film] in my style, and to have this kind of beautiful, dreamy world that I like — but with a plot!” 🙌 Click the link in our bio for more details and photos from the film. 📷: Ben Rothstein

A post shared by Entertainment Weekly (@entertainmentweekly) on Feb 8, 2017 at 7:13am PST

"It's just trying to create that atmosphere, so you can feel these long, hot days when not much is happening," Coppola's told Entertainment Weekly. "I liked that [the costumes] had been washed a million times and left out in the sun. It just felt very feminine, almost like they were ghosts left behind.

Mehera Bonner Contributor Mehera Bonner is a news writer who focuses on celebrities and royals—follow her on Instagram.
Advertisement - Continue Reading Below
More From Culture
Treat Yourself to a Chick Flick Tonight
Who Will Be on 'Bachelor in Paradise' in 2020?
Advertisement - Continue Reading Below
An Investigation Into the Next 'Bachelorette'
'The Bachelor' Has Already Finished His Season
Can We Talk About Kelly's Mom From Love Is Blind?
The Best Reactions to the 'Love Is Blind' Finale
Hilary Duff Hints About 'Lizzie McGuire' Reboot
Ryan Murphy's Producing a Love Letter to Hollywood
This Is When the 'Love Is Blind' Finale Will Drop
Will Gigi and Damian Actually Get Married?