Along with chain restaurants and the paper napkin industry, another thing millennials have ruined is being able to enjoy movies without examining them through a critical lens. Then: Who cares that the female characters only talk about the male ones, there's casual racism, and there aren't any POC in this? It's FUNNY! Now: All your faves are problematic.

Related Story
Watching \'SATC\' for the First Time in 2015

Knowing this, returning to the rom-coms of your misspent youth is like a mental game of tug-of-war between "I know every line" nostalgia and the vague tingle of queasiness you get when something's just...not right. You've cringed at films that pit women against each other in the fight for the affections of a dude who's not even that great. You've perhaps changed the channel because of how the single non-white or non-cis character was portrayed—if there even was one. But have you ever considered the very specific plight of the Best Friend?

Reasons the Best Friend is one of the worst jobs in the rom-com biz:

Of course, by design, the supporting actor's function is to prop up the star, but Judy Greer deserves better. (I mention her because it is her birthday this week, and girl has patiently played second fiddle to approximately 80 percent of Hollywood's sweethearts.) Maybe she's happy to just have work, but maybe she and her fellow actors would be happier if there were better roles available than "Fake Backstabber Friend" or "Dreary Friend" or "Ditzy Friend" or "Friend Who Is Abandoned for More Popular but Less Genuine Temporary Faux Friends." Something that can't be summed up with a singular adjective. Something for which their characters could be remembered by name, which I cannot, for the life of me, do.

But we know how it ends: She gets a split-second shot at the wedding, standing next to the Main Girl or, more generously, the male lead's friend, because, haha, symmetry. Even the Mean Girl gets more, with a montage dedicated to plotting her destruction.

As we call for more developed characters in our entertainment, we might keep this in mind as another thing to make you feel slightly bad about liking some Reese Witherspoon or Jennifer Garner vehicle. But as long as issues still plague our female leads, there's nothing to do except lament this other, perhaps less pressing way women get the short shrift. That, or write a screenplay that overturns this and all other tropes—one that we can feel completely, un-guiltily good about. 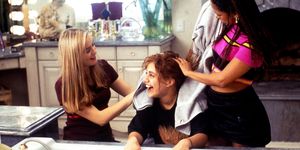 My Love-Hate Relationship with Movie Makeovers