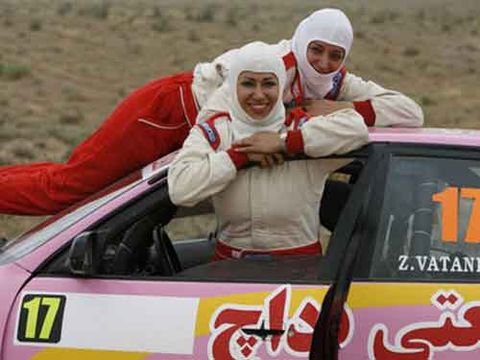 Most of what we hear about Iran these days is worrisome, but there's at least one upbeat movement afoot: the rise of the female race-car driver. Last June, Zohreh Vatankhah (left) and her navigator, Afsaneh Ahmadi (right), entered a multipart rally race in Iran, along with four other women's teams.

The race began near Tehran, shifted to the desert, then returned to the capital, where the winner (not Vatankhah) received $300. (Winnings per race can reach $1,000 — not a bad day's pay, considering Iran's average annual household income is $7,500.)

Though their numbers have steadily increased since 1979, women racers in Iran still must follow the strict Islamic dress code, covering their hair and bodies while driving. But no one said they couldn't paint their cars pink....