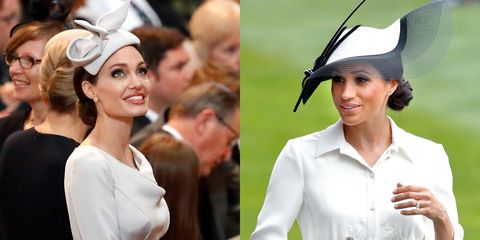 Everyone wants to copy Meghan Markle's royal style. Sadly, most of us can't afford to and, even if we could, we'd have nowhere to wear those fabulous outfits to anyway. One person with neither of those problems: Angelina Jolie.

The actress expertly channeled the Duchess of Sussex's royal style at the Service of Commemoration and Dedication of the Most Distinguished Order of St. Michael and St. George in London on Thursday. And, when in London, dress like the royals do, right?

Angelina was joined at the service by actual royalty. His Royal Highness The Duke of Kent, Grand Master of the Order was also in attendance, according to People.

Angelina stunned in a pale gray, custom Ralph & Russo dress with a cowl neck and matching gloves. Oh, and a fascinator just to make sure the royal vibes came through loud and clear. She even wore her hair in one of Meghan's signature styles: a low chignon.

Meghan is also a fan of Ralph & Russo, of course. The duchess wore a gorgeous black and gold dress with a sheer bodice by the designer in her official engagement portraits with Prince Harry back in December 2017.

Thank you so much for all of the wonderful comments following the release of Prince Harry and Ms. Meghan Markle's engagement photographs. The couple are so grateful for the warm and generous messages they have received during such a happy time in their lives. As a way to say thank you, they have decided to share this candid photograph from the day of their portrait sittings directly with all of you.

This isn't Angelina's first brush with royalty, of course. Queen Elizabeth II named the actress an honorary Dame Commander of the Most Distinguished Order of St. Michael and St. George for extraordinary service to U.K. foreign policy in 2014. The title is a huge honor—it's the female equivalent being granted an honorary knighthood.

Now, if Angelina and Meghan can just coordinate a shopping trip while Angelina is in London filming Maleficent 2...