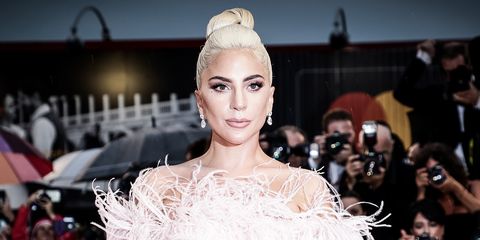 When it comes to over-the-top red carpet fashion, there really isn't anyone out there who does it better than Lady Gaga. The singer-turned-actress may have calmed down on the statement-making style thing since her meat dress days, but she still knows how to turn every head on a photo line.

Related Story
Here's the Trailer for 'A Star is Born' (Finally)

This weekend, Gaga (real name Stefani Germanotta) stepped out at the Venice Film Festival for the premiere screening of her upcoming film, A Star Is Born. The movie is buzzy AF, but Gaga's dress rivals the film as thing-most-worth-talking-about from the premiere. Behold:

And, like her sugary sweet inspiration, spin she did (as you MUST in a dress like that):

Gaga walked the carpet with her costar and director, Bradley Cooper. The pair have been more or less inseparable (in a professional sense) since filming on the highly-anticipated project began.

Early reviews of A Star Is Born (which is the third remake of the original 1937 film of the same name) are absolutely glowing and the audience at the Venice Film Festival screening applauded the movie with an eight-minute standing ovation, according to Variety.

Interest in the film, which is about a country singer who discovers (and falls in love with) a young new talent as his career is waning, has only been growing, as shooting has taken place at events like Coachella. It's also already getting Oscar buzz, which is unsurprising considering the reviews and the film festival love.

This content is imported from {embed-name}. You may be able to find the same content in another format, or you may be able to find more information, at their web site.
Kayleigh Roberts Contributor Kayleigh Roberts is the weekend editor at Marie Claire, covering celebrity and entertainment news, from actual royals like Kate Middleton and Meghan Markle to Hollywood royalty, like Katie Holmes and Chrissy Teigen.
This content is created and maintained by a third party, and imported onto this page to help users provide their email addresses. You may be able to find more information about this and similar content at piano.io
Advertisement - Continue Reading Below
More From Fashion
The Evolution of Engagement Rings
Score Meghan Markle's Bling at Missoma's Sale
Advertisement - Continue Reading Below
It's Time to Get Familiar With the "Shacket"
Jumpsuits: The Ultimate in One-Step Dressing
The Swimwear Trends to Expect In Summer 2021
Meghan Markle's Life in Photos
How Princess Eugenie's Wedding Dress Compares
Celebs Wore THAT to the Airport?!
The Most Iconic Shoe Moments in Film
The Slingback Heels You Need Now