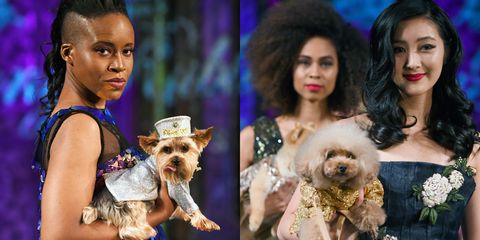 "In my world, humans are the accessories." That's from Anthony Rubio, a.k.a. the Pet Couturier, who designs both womenswear and "canine couture." At New York Fashion Week on Sunday, Anthony Rubio sent both dogs and models down the runway, which led to a series of photos I'll be printing off and taping to my mood board, thank you very much.

"Why should the owners be the only ones to look fashionable?" Rubio told MarieClaire.com of his Spring/Summer 2019 collection. "After all, the pups are the first to be noticed." (I can back Rubio up here: I just adopted a dog, and now my neighbors greet him by name without so much of a glance at me.)

At the very end of Rubio's show, he brought out a golden Lab named Sunny, also known as the Today show's Puppy With a Purpose. Sunny, for his part, wore an Art Deco vest with gold sequins.

This is Rubio's seventh time showcasing his custom-made "canine couture" in New York Fashion Week. In a statement about the show, Rubio noted that both human and canine models "not only strutted in full glory, but dedicated time to really get to know one another and harmonize...to bring about a seamless show."

Here are some of the now well-acquainted models, both human and dog.

And here's Sunny the Lab with Rubio and his embellished vest, because of course you wanted to see him as well. 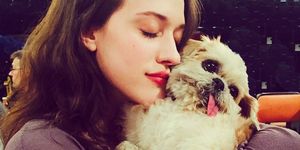 25 Cute Pics of Celebs and Their Dogs
Jenny Hollander Director of Content Strategy Jenny is Marie Claire’s Director of Content Strategy, editing and writing about everything from politics to reality television to accessories and celebrity news.
Advertisement - Continue Reading Below
More From Fashion
See Salvatore Ferragamo's Fall 2020 Collection
The Most Sought-After Bag Styles for 2020
Advertisement - Continue Reading Below
Bottega Veneta Presents Its Fall 2020 Collection
The Best Street Style From Milan Fashion Week
The ﻿Creative Director of ﻿M.M.LaFleur on Style
Every Runway Look From Tod's Fall 2020 Show
Versace Showed Mens/Women's Looks at Its Fall Show
All the Looks From Prada's Fall 2020 Collection
Dolce & Gabbana Is Supporting Coronavirus Research
Every Look in Fendi's Fall 2020 Runway Collection