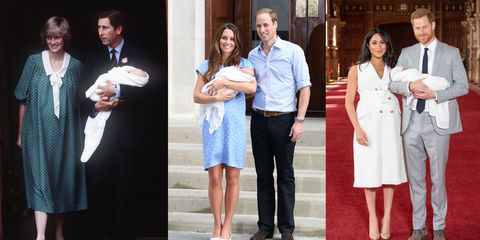 After much speculation on whether Meghan Markle would have her child at home or at a hospital, the Duchess of Sussex officially gave birth to baby boy at an undisclosed hospital on May 6, 2019. Meghan and Harry have already enjoyed some quiet time with their little one, choosing not to present him to the public right away. (Though adorable new dad Harry did step out quickly on Monday to speak to the press.) However, today marks the family's first time appearing in public with the baby in an official photo-call.

For the cameras, the Duchess of Sussex chose a white Grace Wales Bonner dress. (It was originally thought to be Givenchy, per fashion site Meghan's Mirror, but royal reporters confirmed it was Bonner, a talented British designer who has a British mother and Jamaican father.)

Meanwhile, Harry wore a suit while cradling their newborn. Harry is set to fly out to the Netherlands on Thursday, so this photo-call came just in time. Meghan has no publicly scheduled events on her calendar yet as she is on maternity leave.

Obviously, Meghan's first appearance after giving birth was very different from both Kate Middleton's and Princess Diana's. Kate posed for photos while holding her newborns outside the Lindo Wing just hours after giving birth to all three of her children.

All three times, Kate chose dresses by Jenny Packham for her post-baby appearances.

Similarly, Princess Diana also gave birth to Prince William and Prince Harry at the Lindo Wing and stepped out with her newborns right after.

Meghan, however, stuck to her signature style, choosing a Grace Wales Bonner dress, which was similar to her past looks, and Manolo Blahnik pumps. No word yet on a name for baby Sussex. Congratulations to the Duke and Duchess!

Related Stories
Meghan's Fave Fashion Brands Carry Baby Clothes
Oprah Has the Sweetest Gift Ready for Baby Sussex
Meghan Markle Didn't Give Birth at Frogmore
This content is created and maintained by a third party, and imported onto this page to help users provide their email addresses. You may be able to find more information about this and similar content at piano.io
Advertisement - Continue Reading Below
More From Royal Family Fashion Guide
For Prince George Turning 8 Is a Fashion Milestone
Meghan's Sunglasses Are On Sale for Prime Day
Advertisement - Continue Reading Below
The Meaning Behind the Royal Family Member's Names
Meghan Wore a Meaningful Necklace for Vax Live
Meghan Markle Wore Carolina Herrera for Vax Live
Kate Middleton's Nod to Diana at Philip's Funeral
The Most Genius Royal Fashion Hacks of All Time
Pippa Middleton Goes for Stylish Stroll In London
Meghan Markle Wears Armani for Her Oprah Interview
Shop Meghan's Stunning $30 Summer Dress