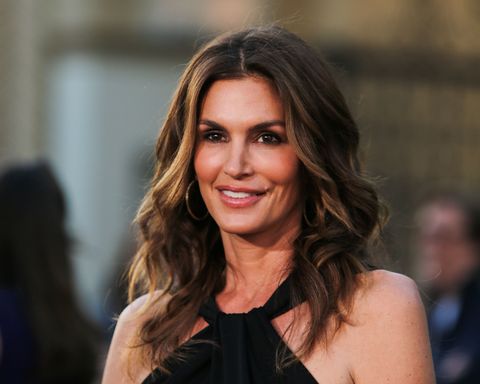 Update, 3/3: Photographer John Russo, who took the photograph in question, has come forward to say it was stolen from him before being disseminated online. He also contests the accuracy of the image as it was presented, issuing the following statement:

"An image of Cindy Crawford taken by me for the December 2013 edition of Marie Claire Mexico was stolen or otherwise unlawfully accessed, and then maliciously altered and distributed to the media. It has been falsely claimed that this photograph represents an un-retouched image of Cindy Crawford. This is not true. It is a fraudulent, altered version of my photograph."

A photo of Cindy Crawford has been circulating on Twitter, revealing a body that defies expectations. While the claim accompanying the photo (which you can see here) is that it will be printed in an upcoming issue of Marie Claire, its origins are actually from a December 2013 cover story from Marie Claire Mexico and Latin America. It appears that this version is a leak.

No matter where the photo came from, it's an enlightenment—we've always known Crawford was beautiful, but seeing her like this only makes us love her more. And as she told us at the premiere of her new documentary last week: "I really think—at any age—it's learning to be comfortable in your own skin. ...If women would treat themselves with the same kind of love they give to their friends, that would be such a great gift we could give ourselves. ...What makes you the most attractive is self-confidence. That's what people see."

Read more in her interview here.

"I Have Those Days": Cindy Crawford Is Just Like Us When It Comes to Body Confidence

Uma Thurman Has the Best Response to Those Plastic Surgery Rumors

Jessica Pels Editor-in-Chief As the editor of Cosmopolitan, I oversee the editorial for all of Cosmo's efforts across print, digital, video, and emerging platforms.
Advertisement - Continue Reading Below
More From Fashion
What the Founder of Lingua Franca Wears to Work
The Best Grammys After-Party Outfits
Advertisement - Continue Reading Below
The Spring Trends That'll Shake Up Your Wardrobe
Behold: The Sexiest Looks at the 2020 Grammys
The Best Red Carpet Looks at the 2020 Grammys
Shop Kate Middleton's Personalized Charm Necklace
PSA: Anthropologie Is Having a Sale All Weekend
Treat Yourself to These Pretty Lingerie Pieces
Doutzen Kroes Goes Behind the Scenes at Dior
Louis Vuitton Unveils Its Spooky Pre-Fall Lookbook