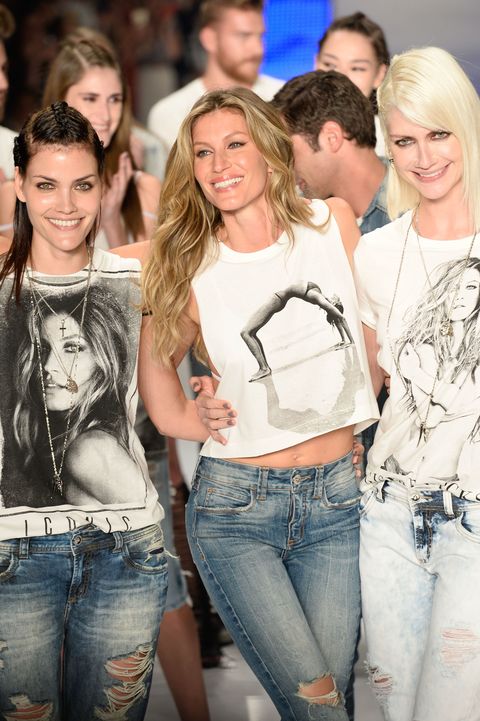 Congratulations Love of my Life. You inspire me every day to be a better person. I am so proud of you and everything you...

Gisele took to the runway one final time, walking in Colcci's Spring 2016 show as husband Tom Brady and other famiy members cheered her on from the front row.

After her first two looks, Gisele and a whole platoon of models stormed the catwalk à la Dolce & Gabbana, except there weren't any babies this time—just T-shirts emblazoned with Gisele's face.

It was previously reported her final show would be Colcci.

Update, 4/13: David Gandy's told him to run like the wind away from Fifty Shades. Gisele's told her stop doing runway. Is it just me, or do models' bodies do more than just carry their brains around?

"Automatically my body tells me if what I do is worth it, and it asked to stop," she told the Folha de Sao Paulo newspaper in an interview published Saturday. "I respect my body, it's a privilege to be able to stop."

She once again reassured us that she won't be leaving modeling completely—at least not until her abs inform her it's quitting time.

Update, 3/18: Before you start reading, just know that everything will be all right because it's not like we'll never see her again on the side of a bus or something. Okay, here goes.

Gisele Bündchen, the world's highest-earning model for the past eight years, is hanging up her runway-walking shoes for good, her representative said Wednesday. "Gisele will focus on special projects and also spending more time on her number one priority: her family," said her sister and spokesperson Patricia Bündchen in a statement.

While this is indeed a Big Deal and reason enough to skip work tomorrow, GB runway appearances have been so rare in the past few years that it's not as if...we'll really notice she's gone. Still, we will miss those cameos, and this does mean she can now officially come out of retirement once in a while to walk Balenciaga, which would be a real cause for panic—the good kind. Boa sorte, Gisele!

Original post, 3/16: The Great Model Exodus of 2015 continues, though this time, it's not another Angel fleeing Victoria's Secret—it's just Gisele Bündchen possibly leaving the catwalk. Forever.

According to Brazilian daily Moda Estadão, the 20-year catwalk vet will call it quits after walking for Colcci at São Paulo Fashion Week in April. This would be a poetic gesture given that she has a history with the brand: She's its longtime face, for example, and it was her first runway appearance after the birth of son Benjamin in 2010.

Of course—even though she might be leaving the runway life behind—she'll still be booking loads of magazine jobs and ad campaigns, but fashion just wouldn't be the same without a cameo now and then from one of the supermodels we grew up with. (See: Chanel Spring 2015.) After all, is there any girl out there right now who can move like this?

And the Top 5 Highest Paid Models Are...

This content is created and maintained by a third party, and imported onto this page to help users provide their email addresses. You may be able to find more information about this and similar content at piano.io
Advertisement - Continue Reading Below
More From Fashion
Refreshing Ways to Style a Cardigan
The Foolproof Guide to Cleaning Your Jewelry
Advertisement - Continue Reading Below
Nordstrom's 2021 Anniversary Sale Is the Best Yet
Hats That Will Make a Statement—In a Good Way
The Most Exciting Jewelry Trends for Fall 2021
Maxi Dresses That Work for Every Occassion
The 100 Best Shopping Sites to Browse Through
The Perfect Vests for Layering
How to Make White Sneakers Look Brand New
Colors of Fall You're About to See Everywhere