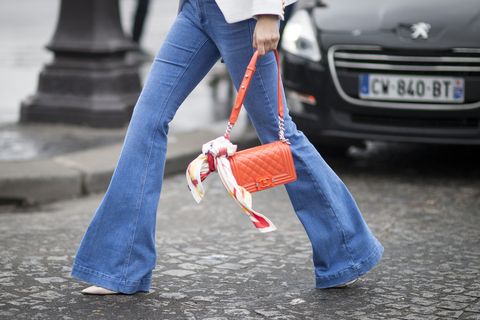 What, may I ask, is your problem? Not with the weather or in general or even with me ATM, but with big pants.

Seriously. Every time some kindhearted editor like me recommends a pair of nice, full-legged jeans, the usual consensus in the comments section and on social media is something like, "GET THAT POISON AWAY FROM ME." But no one will say why we'll have to pry her skinny jeans from her cold dead hands, thank you very much. Is it a deep, irrational fear of clowns and the trousers they wear, held up by suspenders and the possibility of mass murder? Is it funhousemirrorphobia, which compels sufferers to refuse any clothing that's not skintight because it might make them look bigger than they really are?

Let me assure you this isn't some ultra-shady pact between the denim barons and women's magazines: I truly, really, genuinely think you would like wide-legged pants if you would only give them a chance.

For starters, they've been around far longer than those straw wrappers we call skinny jeans, most likely because they're leg-lengthening and never, ever obscenely, um, form-fitting. (Not that I'm asking you to give them up!) All the coolest girls wore them. Lauren Bacall. Marlene Dietrich. Coco Chanel. J.Lo. They're at most just as uncomfortable as denim leggings masquerading as trousers but probably less so because you don't have to start peeling them off at calf level so they don't get stuck halfway down, causing you to hop into your closet door. They force you to do a fun swish-kick motion that feels like you're a Godzilla-size firefighter kicking in tiny doors.

Like most reasoning when it comes to generally any silhouette with a bit of volume, I'm betting there's probably a fundamental, crippling misconception here that you must be tall and skinny to "pull them off." So wrong. There are no prerequisites for wearing WLP. Everything you need you were born with: legs, a waist, and maybe—just maybe—a little bit of guts.

How to Wear Flared Pants in Real Life and Look Incredible

10 Ways You're Ruining Your Jeans

Chelsea Peng I'm Chelsea Peng, the assistant editor at MarieClaire.com.
Advertisement - Continue Reading Below
More From Fashion
The Most Daring, Sheer Celebrity Outfits Ever
Free People's Jeans Sale Is Giving Me Life
Advertisement - Continue Reading Below
The Item I Wear to Death: My DVF Camel Coat
The Best Pairs of Grown-Up Denim Shorts Out There
Stock Up on Cute, Flirty Summer Dresses
Cartier Women's Initiative Announces Its Finalists
What Marie Claire Editors Wore to Get Their Jobs
Is the Next Big Wedding Trend Reversible Gowns?
Our Favorite Throwback "It-Bags"
What to Buy at Nordstrom's Spring Sale