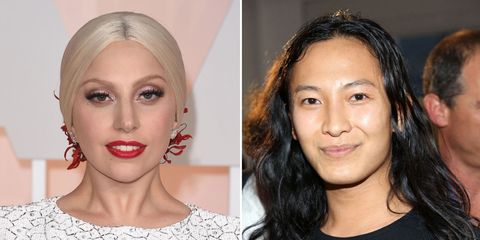 Update, 5/4: No octogenarian jazz singer nor a party bus, but loads of celebrities and the most #onbrand venue in town: Lady Gaga and Alexander Wang did throw a Met Gala afterparty, and it was indeed the coolest.

Presumably after their guests were given sufficient time to change/were ferried over to Queen of the Night at the Diamond Horseshoe—it's sort of like a super-sexy circus meets dinner theater—GagaxAlex began the festivities, which, judging by the photos, included plenty of raging and multiple Miley Cyrus performances.

Don't you wish you were there? Me too, guys. Me too.

Original post, 5/1: Expert event planners Lady Gaga and Alexander Wang will reportedly celebrate the blowing of the Popsicle stand that is the Met Gala by making everyone decamp to an undisclosed location where Fun, Edgy Things will occur.

According to The Cut, the designer and the chanteuse might be co-hosting a party following Monday evening's Fashion People Oscars, during which actresses and models in priceless chinoiserie could conceivably hop on a party bus piloted by Tony Bennett. Will Gaga perform? Is it even safe to sing and drive? We'll let you know—not that we'll be there either, but because we'll be trawling social media obsessively for any footage.

Everything Your Favorite Stars Have Ever Worn to the Met Gala