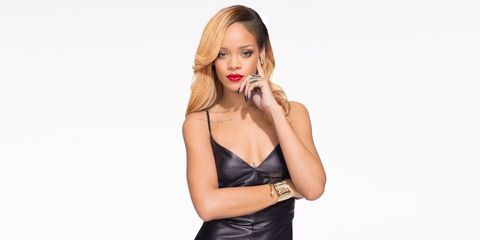 Original post, 7/15: Typical Rihanna: We *think* she's going to put out a line of bazooka-shaped handbags, and instead, she swerves, drops off bitches who owe her payment in the desert, then goes and designs some socks.

Featuring a kind of Sex Pistols-y newsprint collage, the singer's limited-edition "Murder Rih Wrote" collaboration with Stance comes in both crew-cut and over-the-knee, the latter of which RiRi wears with heels and little else in a promo image published on Vogue. Should your clicking finger fail when it comes time to buy, know that 18 styles will drop in September, followed by a holiday collection in November.

Original post, 6/25: Forever decked head-to-toe in the finer things of life—stunner shades, heavy metal bags, and your annual salary's worth of bling, Rihanna is taking her passion for accessories to the drawing boards.

According to a new report from Grazia, RiRi is on the verge of launching her own line and it has the coolest name ever: $CHOOL KILLS. (Because of course.) Her company (Roraj Trade, LLC) recently filed an application at the US Patent and Trademarks office for the edgy moniker, no doubt an homage to her no-looking-back decision to drop out of high school. The collection is said to include a slew of leather products, tote bags, purses, and eventually clothing down the line. And for those wondering, her latest venture will not be hindering her music career.

"Rihanna has already had a successful clothing line with River Island and is not limiting herself to just music and touring for the rest of her life," a sourch told Grazia. She will continue to release singles and albums, but she's had plans in place to expland in other areas like fashion, for a good few years now."

A style empire with the RiRi at the helm just makes sense, what with her previous River Island collections, Jacquie Aiche metallic temporary tattoo collab, athleisure-perfect campaign for PUMA, and being the face of Dior and all. So don't mind us, we'll just be cooling our heels all summer, waiting for this game-changing line to drop...

Getty Images
Advertisement - Continue Reading Below
More From Fashion
What the Founder of Lingua Franca Wears to Work
The Best Grammys After-Party Outfits
Advertisement - Continue Reading Below
The Spring Trends That'll Shake Up Your Wardrobe
Behold: The Sexiest Looks at the 2020 Grammys
The Best Red Carpet Looks at the 2020 Grammys
Shop Kate Middleton's Personalized Charm Necklace
PSA: Anthropologie Is Having a Sale All Weekend
Treat Yourself to These Pretty Lingerie Pieces
Doutzen Kroes Goes Behind the Scenes at Dior
Louis Vuitton Unveils Its Spooky Pre-Fall Lookbook