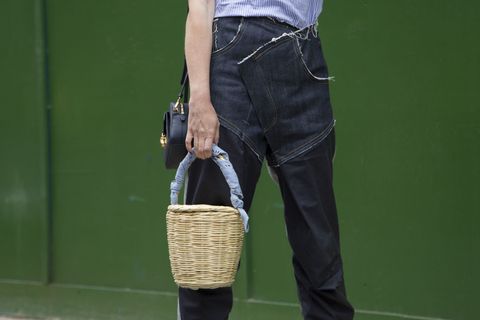 It's about freedom and fun and identity. And it's also about keeping your favorite things near at all times.

In several cases of late, that precious something is made of raffia or straw (optional pompoms), contains memories of sunshine and poolside Aperol Spritzes, and was probably acquired from Mallorca or Mykonos or literally a store called "Jane Birkin Basket." It is the Traditionally Seasonally Inappropriate Bag, which defies constructs of both time and space so vehemently that it's basically the wormhole of accessories.

What's genius about the TSIB: that it's unexpected when the months ahead dictate wooly, slithery, furry, or velvety textures. As inconspicuous as a 20th-century nurse stranded in Scotland, circa 1745! But when everything is drab and muddy-slush-colored, and you're trying to decide whether to buy a HappyLight or move to L.A., its real magic activates and encourages you to hold out—at least until it becomes the Traditionally *In-Season* Bag again.

Next up: fur on the sand? Carhartt at the disco? JK, but never say never.