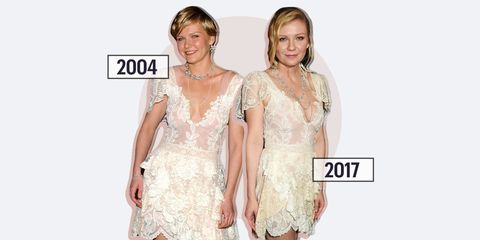 When Kirsten Dunst arrived at a Chopard event in January wearing a lacy Christian Lacroix frock she first trotted out for the Vanity Fair Oscars party in 2004, people noticed—as they have been, according to what is now the typical response to celebrity outfit-repeating: surprise, delight, then praise. Yet in 2017, when "pulling a Kate Middleton" has become A Thing People Do and blogs keep missile-accurate track of every time Kendall Jenner laces up the same sneakers, why does this trick still work on us?

To answer that question, we must first understand why celebrities "shop their closets" in the first place, since they're expected to have access to the best and latest (and, more often than not, borrowed). For both the Duchess of Cambridge and actors, we might say that it's a device to convey realness and frugality, whatever that means to the monarchy and professionals who can make seven figures an episode. And it's the ultimate show of brand loyalty, as in, "I love you enough, Designer Who Is Also a Friend, to make myself the subject of a one-sided Who Wore It Better."

There can be a certain sort of defiance in it too, one that elicits admiration—we know the red carpet is a battleground, where skirmishes for recognition are fought and stars grapple to scale the greasy pole of fame. So that's why most combatants are afraid to even wear vintage—unless it's designer and appropriately old enough to not be mistaken for something out of season but also new-feeling enough to not scream "I borrowed this because I couldn't get anything else!" Keira Knightley must be above playing this game, then, because she's dusted off her Chanel couture wedding gown twice, as you can see above.

But most of all, it might have to do with our expectations. While we want them to be just like us in some ways (shopping their own hemp mylk and cage-free eggs, corralling their children for the school run), we want them to be better than us in others. They have to be. Otherwise, what do we look up to them for? This is why we only like it when the second outing is as well- or better-executed than the first time around.

Even if we don't like to admit it, re-wears make comparison entirely too easy, and they unwittingly invite us to think about bodies. Did Kate Moss's body look any different when she stepped out in a feathery off-the-shoulder LBD she'd walked the red carpet in (with Johnny Depp!) six years earlier? Did Gigi Hadid's in a sheer Versace jumpsuitduplicated within an even shorter interval?

With Kirsten Dunst, even though she's just as incandescent now as she was that early-aughts Oscars eve, the shadier Instagram commenters still speculated about the size of her chest. And this is why we should still be surprised—if we had more compassion, we'd remember that these are people like us, just under different circumstances. We would understand that you'd have to be very brave to publicly repeat yourself, because when the side-by-sides inevitably come out, your opponent would be a younger you.

This is of course a woman-specific phenomenon. (Never forget the male Australian newscaster who wore the same suit, on air, for a year and nobody noticed.) And for once, I am okay with that—only the aspects that involve inventiveness and discipline and confidence, all good things. But the body-policing? That we can do without.