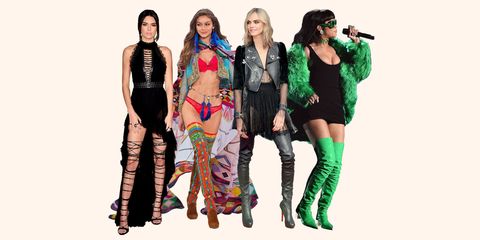 Like summer leather, thigh-high boots are another declaration of sartorial independence—as in, "I have people who put my shoes for me." Cool. Here, 30 examples of famous people presumably not having to deal with the mechanics of full-leg leather and which lace goes through which grommet.

Pray, on behalf of poor interns everywhere, that there was a zipper running up the back.

And to think you had to watch a YouTube tutorial to lace up your new Supergas.

But, knowing Rihanna, she was probably like, "You're not doing it right," and took over halfway.

We have photographic proof for this one.

5 of 30
Kendall and Kylie Jenner

From the POV of the helpers, nobody wins here.

All for the photo.

Even more for the photo.

::fingers become clumsier thinking about fumbling with all those buckles::

Possible to pull on alone, if you subtract the hopping around and cursing.

Okay, but what is up with wearing such difficult shoes courtside?

The club can't even handle me right now, because my feet hurt and I seriously have to go home.

At least they've got a bit of ruching, so it's not like Saran-wrapping your legs.

Versus a less reasonable, really tall one.

Do you think they had to Windex these beforehand?

Not so bad—until you think about the natural foot-swelling that goes on at the end of the night that makes you almost pull your leg out of its socket with all the tugging.

Why do you think she kept these (Balenciaga) guys on for a Met Gala after-party?? (Also, LOL @ the guy's face in the back.)

The biggest night in fashion calls for the hardest shoes.

Bold move for a runway show.

Thank goodness these weren't in when Kim Kardashian was the one who'd have to do them up.

Just another day at the office. 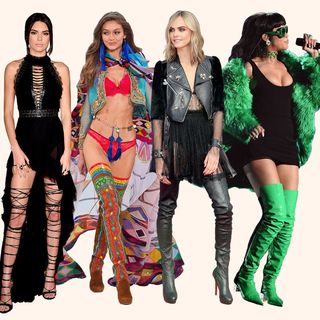