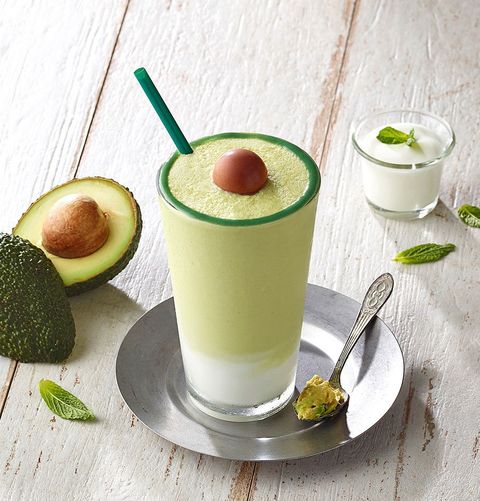 It’s common knowledge that millennials love avocados—they’re the reason we can’t afford houses, according to this dumb rich guy—and the ways to enjoy this beautiful fruit are endless: Guacamole, a club sandwich, in a salad, baked with an egg fried in the middle. In fact, I believe that when millennials eventually secede and form our own nation, the flag will be an image of avocado toast on a light pink background.

But an avocado frappuccino, like the ‘Avocado Blended’ unveiled in Starbucks across South Korea, might be a bridge too far. Apparently a version of it debuted a few years ago in the country and this is a revamped version, back by popular demand, so people are apparently down with it, taste-wise. My issue, though, is not one of flavor but one of optics, so a plea to Starbucks executives: Don’t make this a thing stateside.

See, millennials in the U.S. are already having a hard time with our image. Not only are we basically Capitalism Serial Killers (much to the chagrin of rich people who thought, like, fabric softener would be the textile of the future), but some people still aren’t even sure if we should be doing normal stuff, like running for office. And if any two items embody the arguments for why millennials shouldn't get to be in charge, they are expensive coffee drinks and avocados. What if a one-two punch like the avocado frappuccino is the equivalent of highlighting in bold all the reasons they say we’re too narcissistic, materialistic and irreligious a generation to deserve the American Dream? It might push these naysayers to incrementally quiet our voices until Only ‘90s Kids Will Remember Basic Human Rights.

Wait, I’m getting word that the “pit” on top is made of chocolate. That’s...that’s actually kind of genius. Maybe drinking an avocado frappuccino is the equivalent of telling those naysayers to go suck it (ideally out of a large Starbucks straw)? Maybe, just maybe, Avocado Frappuccinos are the protest symbol we’ve been looking for.

You know what? I changed my mind. I’m into it. Please, Starbucks executives, for the good of our nation’s future, bring the avocado frappuccino to the U.S.

Advertisement - Continue Reading Below
More From Food & Cocktails
Tequila Recipes to Get the Zoom Happy Hour Started
50 Easy At-Home Vodka Cocktail Recipes
Advertisement - Continue Reading Below
Costco Is Refusing Returns On High-Volume Items
The Delicious Drinks on Starbucks' Secret Menu
Be Fancy, Sip a Vermouth Cocktail
The Tastiest, Fanciest New Year's Eve Cocktails
Elevate Your Next Toast With a Champagne Cocktail
91 Drinks to Get You in the Holiday Spirit
The World's Largest Starbucks Is Opening
Starbucks' Holiday Cups Are Back In Stores