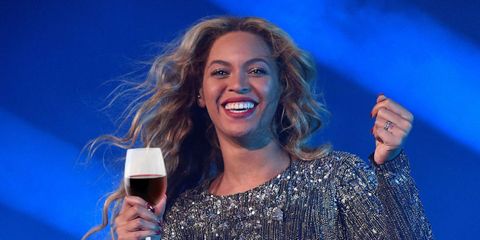 Stars—they like alcohol just as much as the next guy. But what do they actually order at a bar? Just in case, you know, you're out one night and find yourself next to Beyoncé and you want to know what to offer to get her? Or because you just want a little more insight into your most beloved stars and knowing their bev of choice feels so *insidery*? Here, your answers.

It just feels right that Aniston goes for a good ol' marg. "Justin actually makes the perfect margarita with Don Julio 1942, because there's no agave, no sugar, no mix. It's pure tequila, lime juice, and a squinch of Cointreau. It's delicious," she told Yahoo.

ScarJo likes her drink simple and classic—and it makes sense, given that she's been in ads for Moet and Chandon.

Oprah's gone on record many times saying that her favorite cocktail is a Moscow mule, a cocktail of vodka, ginger beer, and lime juice. Simple, refreshing, and even better when served in its signature copper mug. (Check out our favorite recipe here.)

Okay, full disclosure: This is her *vacation* beverage of choice. But girl loves her libations—she's also partial to tequila, champagne, and plain ol' beer.

Mindy Kaling is all about the rum and ginger beer drink known as the dark and stormy. (Because it's delicious.)

A take on the French 75—with vodka instead of gin—is Moss's drink of choice. She's been known to order them at the Hemingway Bar at The Ritz in Paris. "I've been staying at the (Hotel Ritz) since I was 17, and I've spent a lot of time in the Hemingway Bar," she told Playboy. "So my drink is the French 76, which is vodka, lemon juice, and sugar topped with champagne. Love! Two of those and you're like, 'Oh, life is amazing.'"

Madonna's love of a pomegranate martini has been well documented, and who wouldn't love a strong drink with a sweet, fruity finish? (Answer: no one.)

Beyoncé has been known to dump sparkling wine into a hot tub, but she's also known for loving the red stuff. We're with you, girl. (On the red wine thing, not on the dumping-champagne-into-a-tub thing. We would prefer to drink that thankyouverymuch.)