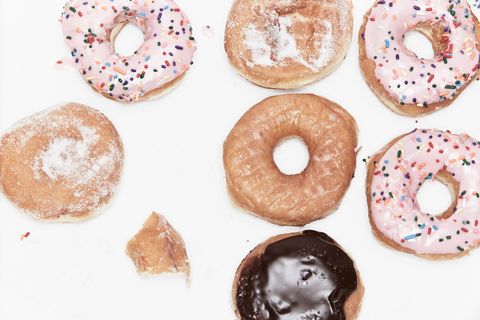 SWEETS
Unable to resist the power of the doughnut? A study published in The American Journal of Clinical Nutrition found that both sugar and fat stimulate a pleasure region of the brain, but sugar has the greater effect, making it even more challenging a food to resist. "Cravings are linked to deprivation," says Julie Upton, a registered dietitian and co-founder of Appetite for Health, "and the more people avoid or try to restrict these foods, the worse the cravings become." So you might want to just have the piece of chocolate instead of torturing yourself. Upton also suggests snacking on dried fruits, like mangos, prunes, and nectarines, or keeping some hard candy at your desk. "They take time to eat and their calorie counts aren't too high," she explains.

CARBS
"Carbohydrates are the body's number one source of fuel, so when we're tired, they're the first thing we want to grab," says Frances Largeman-Roth, RDN, author of Eating in Color: Delicious, Healthy Recipes for You and Your Family. So if you find spaghetti's been calling your name recently, you might want to rethink your usual bedtime. And when your body is caught up on rest, Roth suggests choosing the healthier versions, including whole grains (like whole wheat pasta, quinoa, or oatmeal), and "the carb-heavy fruit," bananas.

CHEESE
Fancy a wine and cheese party? If you're already smiling at the mere mention, it's not just you—cultural and environmental cues can play a big part in food longings. (Interestingly, a recent report states that Chinese citizens have an increased appetite for cheese, which was previously not a big part of their culinary culture.) If the craving just won't quit, try a lighter version. "Sometimes, you just want that salty, creamy flavor," says Roth. To satisfy this need, she suggests sprinkling real grated Parmesan over sautéed veggies or adding a dollop of plain Greek yogurt over a bowl of fiber-filling chili.

FAST FOOD
It's probably no surprise, but PMS is a major cause of these salty, fattening food cravings. When it's that time of the month, swap take-out for made-at-home versions to cut calories. Sweet potato fries (either homemade or found in the frozen food aisle at the grocery store) give you that salty-sweet combo, for example. Also, researchers from Sweden have found that a spinach extract containing green leaf membranes called thylakoids may decrease hedonic hunger—a term for craving the unhealthy stuff, including sweets and fast foods—up to 95 percent.

COMFORT FOODS
In general, cravings are more closely linked to our emotions than our physiological needs,

Thylakoids may decrease unhealthy cravings up to 95 percent.

states Rachel Warren Meltzer, MS, RDN, author of The Smart Girl's Guide to Going Vegetarian. When you're having a terrible day, you're going to reach for your go-to comfort food. Don't deprive yourself! It's typically better in the long run to have a small amount of the food you really want (ice cream) than eating a bunch of the "diet" version (Greek yogurt). A 2013 national survey found that Americans would rather give up Facebook than their favorite comfort food, so you're in good company.

SALT
Maybe you're a gal who's into savory over sweet. There are other ways to get the full flavor you're seeking without going over your sodium limit. Warren Meltzer suggests adding acidic ingredients, like vinegars, lemon, and lime juice, in place of extra salt to dishes to help quell the need. You may also want to head to the gym, since a recent study found that aerobic activity can enhance a certain part of the brain (the dorsolateral prefrontal cortex or the DLPFC) connected to cravings women had for calorie-dense foods, such as potato chips.

CAFFEINE
Your thirst for java or other jolt-inducing beverages may have multiple causes: a formed habit, a lack of stamina, or even a gene variation. In 2012, researchers from University of North Caroline at Chapel Hill and six other institutions located two genes that may determine the way our bodies metabolize caffeine, as well as how much we consume and crave it. So if you're looking to decrease your intake of this stimulant, Warren suggests sipping black, green, or mate teas, which contain lower amounts of caffeine. "Just keep in mind that going cold turkey can cause withdrawal symptoms, so you may want to cut back a little each day until you're where you want to be," she adds.

CHOCOLATE
"Chocolate is the most commonly craved food among women," states Upton. And while it may sound too good to be true, this isn't such a bad thing: "The antioxidants in dark chocolate have many positive health properties." Forego the low-quality versions (AKA inexpensive milk chocolates) and instead opt for one or two squares of the dark kind with the highest amounts of cacao (around 85 percent). Upton also suggests either sipping a chocolate protein shake or a hot chocolate made from high-quality cacao. Going the luxury route is definitely the most fun way to deal with a craving.

This content is created and maintained by a third party, and imported onto this page to help users provide their email addresses. You may be able to find more information about this and similar content at piano.io
Advertisement - Continue Reading Below
More From Health & Fitness
I'm a Black Woman, Mother, & Breast Cancer Patient
Jenna Dewan’s Post-Baby Abs Are 🔥 In New Pic
Advertisement - Continue Reading Below
What to Know About Your Blood Type and COVID-19
Enduring Breast Cancer in a Covid-19 World
Deciding Between a Lumpectomy or Mastectomy
Everything to Know About COVID-19 vs. the Flu
Do COVID-19 Symptoms Happen in a Certain Order?
Your Body, Your Business?
Are Contact-Tracing Apps Worth the Privacy Risk?
Finding Self-Worth in My Self-Harm Scars