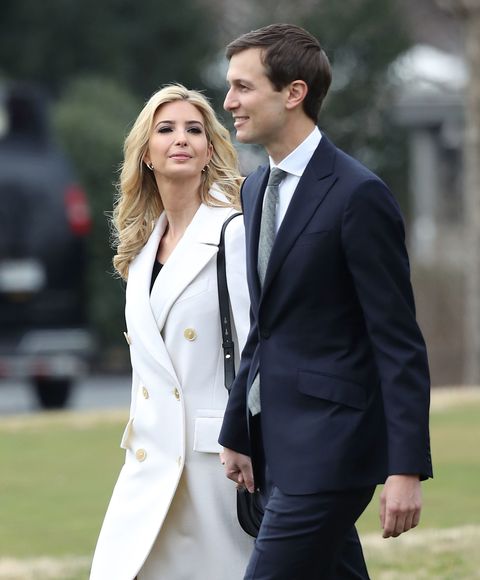 Though he has plenty of competition, Jared Kushner is one of the most mysterious people in the White House. He holds several positions: son-in-law to the president, senior advisor to the president, founding director of the Office of American Innovation, and occasional envoy to Iraq. And yet...no one ever hears the guy speak.

His silence is such a marked characteristic that Saturday Night Live joked about it in a recent episode. "Jared, I've sent you all around the world to represent me, and nobody's heard you speak. You're like a little Jewish Amelie," said Alec Baldwin in character as President Trump.

His muted history explains why his appearance on CBS This Morning was so unexpected. The morning crew were filming in the White House's East Room when they pulled in President Trump's daughter, Ivanka Trump, for an impromptu segment.

Then her husband got roped in as well. Though he wasn't fully miked, the hosts demanded he speak. "Can we please get a microphone for Mr. Kushner?" asked Gayle King. Kushner demurred until Charlie Rose yelled out a question: How was his walk on the mall last night with his wife?

"Beautiful. Great company. Beautiful scenery," Kushner said, in what may be his television interview. Thrilling!

Kaitlin Menza Kaitlin Menza is a freelance features writer.
This content is created and maintained by a third party, and imported onto this page to help users provide their email addresses. You may be able to find more information about this and similar content at piano.io
Advertisement - Continue Reading Below
More From Politics
A Valedictorian Speaks Out Against Abortion Bans
Standing Between Care and Violence
Advertisement - Continue Reading Below
Seeking Healing a Century After the Tulsa Massacre
What to Know about Texas's Abortion "Trigger Ban"
A New Book Invites Us to Rethink Menstrual Equity
We Must Remember George Floyd's Legacy
This Is How Much Joe Biden Is Worth
Joe Biden's Granddaughter Is His Biggest Fan
Watch Katie Porter Destroy a Big Pharma Exec
SCOTUS Will Hear a Major Abortion Case