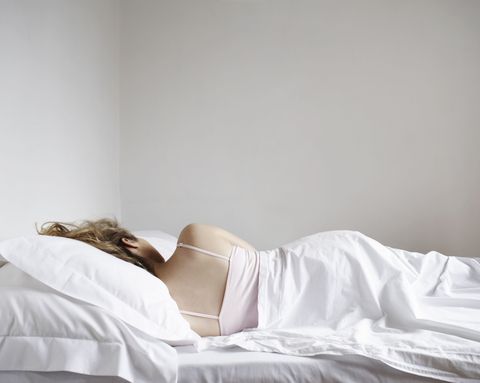 When I first met my husband, he was a fun, confident, and affectionate person. He worked in sales and I was getting my personal training certification to launch a big career change. It was the second marriage for both of us, so we felt like we had learned a lot from our previous relationships to really make this one work. For a while, I believed we'd really make it—he'd take me to amazing dinners, on romantic weekend trips, and we'd spend hours talking and laughing. And sexuality was never an issue. He was the first one to crack a dirty joke and our physical chemistry was off the charts.

Over time, though, our sex life changed. And by that I mean it became nonexistent. What once was us having sex at least a few times a week turned into one or two times a month, if I was lucky. He grew more emotionally distant and had trouble getting aroused, and while I knew he was dealing with a lot of financial stress at work (and I was bringing in less money due to my job switch), he never wanted to have a conversation with me, or even see a doctor.

The more I tried to talk, the more he withdrew into his work—he started sleeping on the couch, being less affectionate, and making comments about how attractive he found other women. I kept wondering why he was pulling away when I was trying to be open and supportive, and I was almost certain that he was cheating, though I never confronted him about it. I knew I needed to, but I'd already been through another failed marriage and I was secretly hoping things would turn around.

I was almost certain that he was cheating.

One night, he walked in on me mid-act. I was in bed using my vibrator under the covers, and I'd assumed he had fallen asleep on the couch per usual, so I definitely wasn't expecting him. I was right at the brink…and that's the moment he walked in. As soon as he realized what was happening, it was so incredibly awkward. Like, a teenage boy getting caught by his mom awkward. Which took me completely by surprise—it's not like we had never seen each other naked or, you know, had sex before. But instead of getting turned on (like I've been told time and time again is the case for guys) he really seemed hurt and shocked, which quickly turned into irritation and a fight about him not being enough for me.

After that, his emotional wall became even harder to break through, and I was more insecure. I had suggested counseling in the past and though he had always been wary, we finally went together. Unfortunately—or fortunately, depending on how you look at it—that was when we realized that our hearts weren't in it. He was already emotionally checked out of the relationship, and I couldn't keep trying for the both of us.

I couldn't keep trying for both of us.

While obviously there were larger issues between us as a couple, that intimate moment is the one that signaled the ultimate demise of our relationship, in my opinion. My husband could have chosen to accept me and my sexuality, and instead I felt judged. I really wish that we could have been more open about our wants, needs, and desires within our marriage, but eventually I realized that his entire persona when I first met him, even his dirty jokes, were a front; something he used to cover up how insecure he was. It finally sunk in that it wasn't all my fault. I've been dating a little recently and I feel more comfortable in my own skin after working with a therapist on my own. And what's most important, I feel confident about telling the men I'm dating what I need and want—both in and out of the bedroom.

Pick your moment to talk. If your partner is freaking out, don't try to argue with them in the moment. Let things settle a bit and make time for the conversation. Really hear their fears—it will help you get to the heart of any issues, especially any feelings of inadequacy. Even though it can be a tough conversation to have, it can lead to a deeper, more trusting relationship.