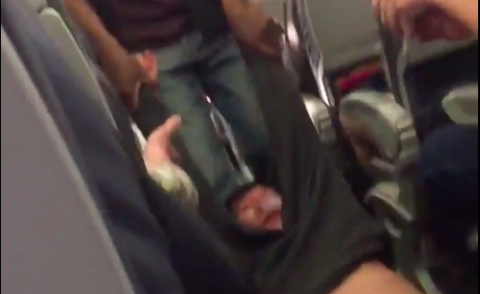 A United Airlines flight from Chicago to Louisville on Sunday was overbooked, so airline personnel responded by instructing authorities to forcibly remove a man out from his seat. Apparently, as has become all too common, the crew asked passengers for volunteers who would take another flight—in this case, to make room for United employees who had connections to make. When staffers couldn't find enough volunteers, though, they called security to the gate and onto the plane. Somehow, one man in particular was chosen to give up his seat, despite the fact he hadn't volunteered. This was the result:

@United overbook #flight3411 and decided to force random passengers off the plane. Here's how they did it: pic.twitter.com/QfefM8X2cW

The man, who claimed to be a doctor with patients he had to attend to in Louisville, refused to get up, so two professionals engaged him physically, then dragged him, bloodied, off the plane. Other passengers were horrified and attempted to capture the incident on their phones. One in particular told WCNC News that "kids were crying and people are disturbed."

@united @FoxNews @CNN not a good way to treat a Doctor trying to get to work because they overbooked pic.twitter.com/sj9oHk94Ik

"Flight 3411 from Chicago to Louisville was overbooked. After our team looked for volunteers, one customer refused to leave the aircraft voluntarily and law enforcement was asked to come to the gate. We apologize for the overbook situation."

You might remember United as the same airline which recently took heat for leggings issues.

"One customer refused to leave the aircraft voluntarily" belongs in the Corporatese Textbook, as does the company's apology for overbooking the flight rather than what they did to the passenger. According to reports, he was "eventually let back on the flight, though he was reportedly bloody and disoriented from the encounter." The flight left two hours late.

This content is created and maintained by a third party, and imported onto this page to help users provide their email addresses. You may be able to find more information about this and similar content at piano.io
Advertisement - Continue Reading Below
More From Travel
The Instagram Guide to Lake Tahoe
Head to These Destinations for a Late Fall Getaway
Advertisement - Continue Reading Below
The Insta-Worthy Places to Visit in October
You Can Rent These Tiny Homes on Airbnb for $1
Where to Stay, Eat & Explore in Sag Harbor
The Instagram Guide to Coronado, California
6 Easy Escapes From NYC
Photos of the Royals on Vacation Through the Years
A Trip to Fiji Is Totally Worth the Long Flight
Barcelona Awaits You Once Quarantine Is Over