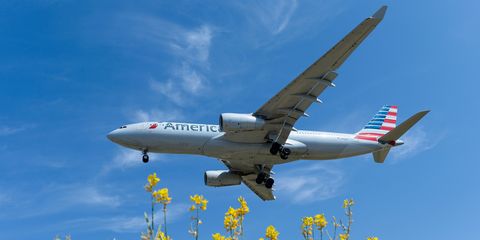 It turns out that United aren't the only airline to be caught on camera mistreating their passengers. Following the shocking incident, in which a man was literally dragged off of his United flight, a new video has surfaced showing an attendant on American Airlines threatening a passenger. What is happening to the world?!

Shared on Facebook, the video shows an argument starting after an attendant on an American Airlines flight snatched a stroller from a woman holding a baby. Unfortunately, the stroller allegedly hit the woman, and narrowly missed the baby.

The incident escalated when a fellow passenger tried to stand up for the woman with the baby. As seen in the video, the attendant became aggressive, and encouraged the passenger to hit him. According to several sources, the employee has been put on leave.

The video has already gotten a lot of attention online, and it's reassuring to know that members of the public are ready to stand up for fellow passengers when bad things happen.

Amy Mackelden Weekend Editor Amy Mackelden is the Weekend Editor at HarpersBAZAAR.com, where she writes about entertainment, celebrity news, beauty, and fashion.
This content is created and maintained by a third party, and imported onto this page to help users provide their email addresses. You may be able to find more information about this and similar content at piano.io
Advertisement - Continue Reading Below
More From Travel
The Insta-Worthy Places to Visit in October
You Can Rent These Tiny Homes on Airbnb for $1
Advertisement - Continue Reading Below
Where to Stay, Eat & Explore in Sag Harbor
The Instagram Guide to Coronado, California
6 Easy Escapes From NYC
Photos of the Royals on Vacation Through the Years
A Trip to Fiji Is Totally Worth the Long Flight
Barcelona Awaits You Once Quarantine Is Over
The Instagram Guide to Jupiter, Florida
Bored at Home? Take a Virtual Vacation