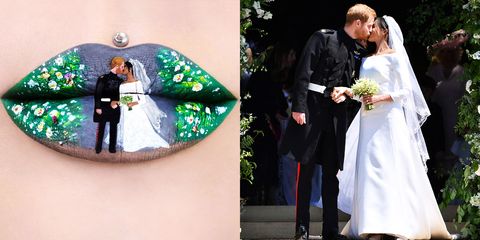 In case you, for some reason, avoided all social media over the weekend—ahem, the biggest weekend of the entire freakin' year—then let me inform you that the royal wedding happened, Meghan Markle looked absolutely gorgeous in her chill wedding makeup and low, twisted-and-pinned updo (which, side note: only took 45 minutes to create), and that I'll be obsessively looking at the pictures every week until I die.

But I'm not the only one. Because less than 24 hours after Meghan and Harry tied the knot, the makeup gurus of the world began churning out some of the most insane royal wedding-inspired lewks. Enter: the re-creation of Meghan and Harry's first kiss—painted on someone else's lips. I mean, why the hell not?

Last night, makeup artist Jazmina Daniel posted a photo of her masterpiece on Instagram, and all I can say is WOW. I literally stared at this photo for a solid three minutes (which is a lifetime on social media, let's be honest). The Queen of Instagram-able lip art wrote, "Meghan Markle and Prince Harry Royal Wedding inspired lip art requested by you guys," and added a break-down of products she used to carefully craft the look, which included a mix of eyeliners and liquid lipsticks.

Other users were just as shocked by her lip art, too, commenting, "The lip queen recreating the Royal wedding on her lips... the irony," and "Holy mother the DETAILS."

I honestly wonder if Daniel started painting her lips right after the new Duke and Duchess of Sussex first smooched? Because that amount of detail must have taken a crazy-long number of hours to do. Everything from Harry's scruffy, red beard (which he got to keep for the wedding, by the way) to Meghan's one stray hair in her updo is 100 percent spot on. And for that, I'm in love.

See the actual picture of the newlyweds' first kiss, below, for comparison, and prepare to stare for a whole three minutes like I did.