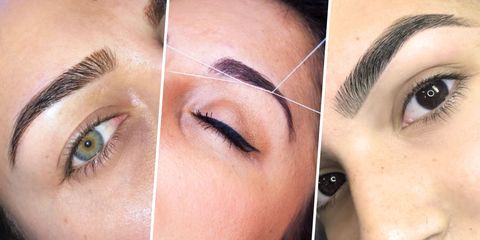 When I was in 7th grade, my mom finally grew tired of my piercing shrieks that sounded each time I asked her to pluck my eyebrows, and decided it was time for me to get them waxed. So off I went to the salon, believing I'd step out looking like my idol, Hilary Duff, and promptly steal the hearts of 13-year-old boys everywhere.

I did not. Instead, I had my brows viciously ripped off and plucked into oblivion, until I was left with only two little tadpoles, along with patches of intensely red, sore skin. I cried the entire car ride home, and I refused to ever let anyone touch my brows again.

It turns out that wasn't really a difficult promise to keep, because after that day, my hair never really grew back, most likely out of fear. Still, arming myself with only tweezers for the last decade has had its downfalls: I get ingrown hairs, I accidentally nip my skin sometimes, and I can never get a fully clean, defined shape like you can with waxing, because you can't exactly pluck away all of your peach fuzz.

I knew, of course, that I had other options, namely in the form of eyebrow threading, which has been an insanely popular method of hair removal for thousands and thousands of years in India, Asia, and the Middle East. Supposedly, promised every single person on the internet, it's significantly less painful than waxing, with way less irritation and inflammation afterward.

A post shared by Brows By Nikki 🧵Beverly Hills (@browsbynikki)

"Unlike with waxing, which rips off the top layer of your skin along with your hair, threading removes the hair and nothing else," says Shobha Tummala, founder of the cult-favorite Shobha hair removal salon in New York City. "You just roll a twisted piece of thread rapidly over the skin, and the thread lassos lines of hair and pulls them out from the root." The result: Clean, precise brows, with happy, still-intact skin.

So, after dragging my feet for approximately my entire life, I decided to finally test it out. After nervously telling the esthetician at Shobha how much of a wimp I am, she wiped off my brow makeup, selected some plain ol' thread from a rack of spools, and got to work, twisting and rolling the thread over the shape of my brows. And, guys, it was completely and totally painless!

No, just kidding—it really freaking hurt. It felt as though someone was slowly ripping off a Band-Aid with my hair attached to it. But if waxing is a 10 on the pain scale, threading hovers somewhere around an eight, which is still more ideal, especially since there was none of that post-wax plucking that used to make me want to punch walls.

Weirdly, my left eyebrow was noticeably more painful than my right, though it's apparently normal, according to Tummala. "Most people's left eyebrow hurts more, and we don't know why," she says, "I've heard it from clients for years and years, but we can't figure out a good reason why." My theory: The left is evil.

Thankfully, the entire thing was over within a cool five minutes, and before the sting could set in, my aesthetician was smoothing a calming rose gel and some hydrocortisone cream over my brows and sending me on my way. It was seriously that fast and simple, with minimal redness—a rare feat for my insanely sensitive and reactive skin. Apparently, not ripping off a layer of your skin helps? Who woulda thunk.

I then had to admit to Tummala one of the other reasons I had been hesitant about trying threading: I had heard it was unsanitary, and that you could get infection. Somehow. Where I heard this? No idea; it was just one of those things. "Honestly, all of those ideas are such misconceptions, and it's so frustrating to hear," says Tummala.

"I think people see it done in mall kiosks, and they see this stranger holding a piece of the thread in their mouth, and then think that thread will be used on their skin, but it's simply untrue," she says. "The thread stays a full one or two feet away from your face at all times; it's only gripped between the teeth to hold the string taut."

And I can honestly verify that my threading experience was way cleaner than any other beauty treatment I've ever tested, including waxing. Like, I almost can't explain how semi-crazy I feel for not having threaded my brows for decades, especially considering how sensitive and reactive my skin is.

It's seriously just a piece of clean thread, ripped off a clean spool with clean hands (which never even touched my face), and nothing else, which is something you definitely can't say about that hot pot of wax filled with unknown ingredients. No dissing waxing, of course, but if you've ever been even slightly concerned about what goes on your face, threading is truly a no-brainer.

I can't promise I'll slot threading into my monthly expenditures now, solely because it takes approximately a decade to grow my brows out, but I will definitely be yelling my newfound love of it from rooftops…while the rest of the world shouts back at me for being 5,000 years late to the party.

Chloe Metzger Deputy Beauty Director Chloe Metzger is the deputy beauty director at Cosmopolitan, obsessively writing about new makeup launches, the best hair products (curly girl here; whattup), and the skincare formulas that really work for every skin type (follow her on Instagram to see behind-the-scenes pics of that magazine life).
This content is created and maintained by a third party, and imported onto this page to help users provide their email addresses. You may be able to find more information about this and similar content at piano.io
Advertisement - Continue Reading Below
More From Makeup
Tinted Moisturizers to Leave Your Skin Glowing
Found: The Best Eyebrow Brushes for Every Look
Advertisement - Continue Reading Below
Editor-Approved: The Best No-Streak Self-Tanners
Lip Balms That'll Save Your Dry, Chapped Lips
Facial Sunscreens You'll Love Wearing (Really)
19 Super Pretty Valentine's Day Makeup Tutorials
Lengthening Mascaras for Your Longest Lashes Ever
The Best Editor-Approved Blushes
Bobbi Brown Believes in Vodka as Self-Care
Beauty Obsessives Will Love These New Products