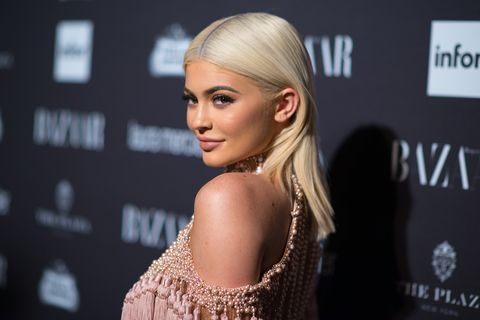 After months of anticipation, Kylie Jenner confirmed her pregnancy on Super Bowl Sunday with the birth, yes birth, of her baby girl. Now, the 20-year-old has decided to leave fans in the dark no more, officially revealing the name of her and boyfriend Travis Scott's child just a couple days later. Say hello to Stormi.

That's right. In an Instagram post showing the baby's tiny hand, the new mom wrote one simple thing: "stormi 👼🏽." Fans had been speculating on the name ever since Kylie revealed her pregnancy and the birth of her daughter, and many thought "butterfly" to be a central theme. Turns out, everyone was wrong. (But hey, maybe there's a middle name mention?)

Jenner posted an Instagram message Sunday night explaining why she decided to keep her pregnancy private over these last nine months alongside an 11-minute documentary-style video titled, "To Our Daughter." Stormi was born on February 1 weighing 8 lbs., 9 oz.

The Kardashian-Jenner clan are thrilled for Kylie, whose child was born just two weeks after Kim Kardashian and Kanye West's third child, Chicago West. Sister Khloé Kardashian is also expecting her first child with boyfriend Tristan Thompson, and is due around March. Here's hoping for more baby pics soon!