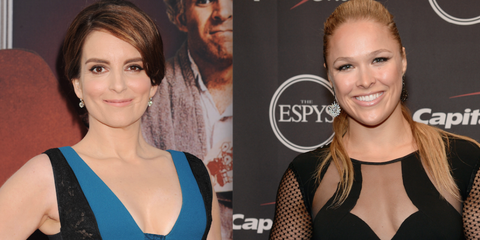 Comedy queen Tina Fey and MMA fighter/sometimes-actress Ronda Rousey are teaming up for a new "female-empowerment" film that sounds like it just might rival the kind of girl power first made famous by the 1998 cinematic masterpiece that was Spice World.

Variety reports that the Fey-Rousey collab is titled Do Nothing Bitches—inspired by a now-viral speech Rousey gave last year, where she said her mother raised her not to be a "do-nothing bitch."

"Just because my body was developed for a purpose other than fucking millionaires doesn't mean it's masculine," she explained in a UFC interview. "I think it's femininely badass as fuck, because there's not a single muscle on my body that isn't for a purpose. Because I'm not a do-nothing bitch."

According to Deadline, the script—written by longtime Fey friend, Paula Pell—tells the tale of "wealthy pampered wives who get a rude awakening at a camp where Rousey plays the no-nonsense instructor." While Fey's role in the movie is still unknown, one thing is certain: Her co-star's first step into the comedy ring is sure to pack a punch.

This content is created and maintained by a third party, and imported onto this page to help users provide their email addresses. You may be able to find more information about this and similar content at piano.io
Advertisement - Continue Reading Below
More From Celebrity
Jennifer Lopez Wears Old Bracelet From Ben Affleck
Simone Biles Cheers on MyKayla Skinner
Advertisement - Continue Reading Below
See the Royals Socialize at a 1991 Cocktail Party
Eugenie's Pics from Inside Harry and Meghan's Home
Queen Trolled Tourists Who Didn't Recognize Her
Blake and Ryan Recreated Their First Date on IG
Charles Expertly Ignored Boris Johnson's Snafu
How Kitty Spencer's Wedding Dress Honored Diana
Dolly Parton On the #FreeBritney Movement
Will & Kate Are Nervous About George's Future