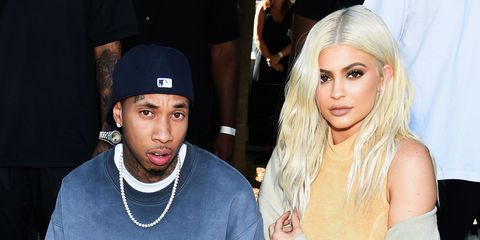 Tyga is speaking out again on those rumors that he's Stormi Webster's dad.

Kylie Jenner and Tyga dated on-and-off from sometime in 2014, until April 2017, the same month that Jenner allegedly began dating Travis Scott. Despite not being spotted together since their final break-up, speculation that Tyga might be Stormi's father has persisted.

But now, Tyga has tweeted about the drama, and he is not here for the rumors. He says:

"I’ve never said anything about someone else’s child or family insinuating my involvement; and will never do so. Please, Stop spreading false stories and attacking people’s families. I have nothing to do with any of that. People should be able to live in peace."

I’ve never said anything about someone else’s child or family insinuating my involvement; and will never do so.

I have nothing to do with any of that.
People should be able to live in peace.

Basically, Tyga has put to rest the idea that he has anything to do with baby Stormi, and it sounds like he's more than ready for any rumors about the topic to stop.

Tyga previously spoke out about his ex on the show Everyday Struggle, which you can watch on YouTube. The host asked him, "Did Kylie fuck you up like that man?" Tyga simply replied, "Nah man, you just get older, you feel me?"

The rapper even elaborated on whether or not he still speaks to Jenner now that she's welcomed her first child. He said, "It was a relationship that was in front of the world. And that was it. She has her new life, I have my new life. And that's it."

Tyga is most definitely moving on.

Related Story
Kylie Jenner's New Video of Stormi Is Adorable
Amy Mackelden Amy Mackelden is a freelance writer, editor, and disability activist.
This content is created and maintained by a third party, and imported onto this page to help users provide their email addresses. You may be able to find more information about this and similar content at piano.io
Advertisement - Continue Reading Below
More From Celebrity
This Is Dax and Kristen's Approach to the Sex Talk
Angelina Jolie Dodged a Question About The Weeknd
Advertisement - Continue Reading Below
Kourtney and Travis Want a "Destination Wedding"
Harry Panicked About the Queen's Hospital Stay
Olivia Munn Doesn't Care About "Settling Down"
These 83 Twitter Accounts Harass Meghan Markle
Adele's Ex Came to a Special Taping of Her Album
Kristen Stewart on a "Spooky" Moment Playing Diana
Travis Covered His Ex' Name With Tattoo for Kourt
Kendall Jenner Wore a Bedazzled Pink Cowboy Hat