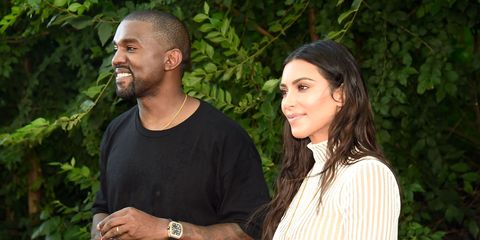 Kim Kardashian and Kanye West are obviously elated to have expanded their family, following the birth of baby Chicago earlier this year. And while it used to be a rarity to see Kanye smile, Kim just shared photos of him totally loving a family day out at San Diego Zoo.

In the sweet snaps shared on her Instagram Stories, Kardashian gave the best insight into what a day out with the West clan looks like. Firstly, North fed an elephant, and looked super stoked about it:

North then posed in front of a hippo, while Kanye looked happier than he literally ever has, while he hugged his son, Saint:

And Kim and North helped to feed some penguins, which Kim surrounded with hearts:

Even though Chicago didn't appear in any of Kim's snaps, it's possible that she went on the family trip to the zoo, too. But as all the photos make clear, the Wests enjoyed spending some family time together, taking time out from their busy schedules to meet the animals.

The West's third child, Chicago, or Chi as she's apparently known, was born on January 16, 2018, via surrogate. Our first look at Kim Kardashian and Kanye West's new baby came in Kylie Jenner's birth announcement video back in February 2018.

Kardashian has spoken at length about using a surrogate to have Chicago, and told Entertainment Tonight:

"You know, it is really different. Anyone that says or thinks it is just the easy way out is just completely wrong."

Related Story
Chicago West Looks So Grown Up
Amy Mackelden Weekend Editor Amy Mackelden is the Weekend Editor at HarpersBAZAAR.com, where she writes about entertainment, celebrity news, beauty, and fashion.
This content is created and maintained by a third party, and imported onto this page to help users provide their email addresses. You may be able to find more information about this and similar content at piano.io
Advertisement - Continue Reading Below
More From Celebrity
The Queen's Hot Grandnephew Is a Thirst Trap
Watch Diana Play Impromptu Piano in Rare Clip
Advertisement - Continue Reading Below
Peek Inside the Cambridges' Country Home
Harry Is Heartbroken About His Family Situation
William and Harry Could Fight Over Diana's Legacy
William Reveals Which of His Kids Is the Cheekiest
Serena Williams's Daughter Is Taking After Mom
EmRata Opts for Faux Fur and Yeezy Boots
Rob Lowe: Prince Harry Is Rocking a Ponytail Now
Rihanna Stuns in $2 Million of Diamonds and Rubies