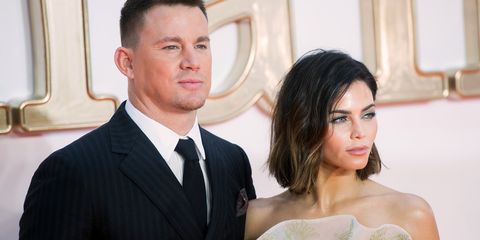 We are one thousand percent not over news that Channing Tatum and Jenna Dewan Tatum have decided to split after nine years of marriage. When the devastating announcement broke, fans around the world let out a collective "whhyyyyyyyy?!"

In digging for answers to that lingering, painful question, some have pointed to a 2015 interview in which Channing discussed his drinking.

"I probably drink too much," he said, originally to Star. "My wife, that's what she bought into." The publication had also pointed to speculation that Channing got flirty with other women while filming 2014's Foxcatcher.

In spite of the very "I'm moving on" vibe of her Instagram, Jenna has responded to these rumors (via her rep).

"Happy to clarify that absolutely none of these rumors are true," her representative told Mail Online. "The reason our statement was so positive [was] because that's the reality of the situation."

The statement in question, which the couple released on their Instagrams, read:

First off, it feels odd that we have to share this kind of thing with everyone, but it’s a consequence of the lives we’ve chosen to lead, which we also happen to be deeply grateful for. We’re living in an incredible moment in time, but it’s also a time where truth can easily get distorted into “alternative facts” ;) So we want to share the truth so you know that if you didn’t read it here then it’s most certainly fiction.

We have lovingly chosen to separate as a couple. We fell deeply in love so many years ago and have had a magical journey together. Absolutely nothing has changed about how much we love one another, but love is a beautiful adventure that is taking us on different paths for now. There are no secrets nor salacious events at the root of our decision — just two best-friends realizing it’s time to take some space and help each other live the most joyous, fulfilled lives as possible. We are still a family and will always be loving dedicated parents to Everly. We won’t be commenting beyond this, and we thank you all in advance for respecting our family’s privacy. Sending lots of love to everyone, Chan&Jenna.

Kayleigh Roberts Contributor Kayleigh Roberts is the weekend editor at Marie Claire, covering celebrity and entertainment news, from actual royals like Kate Middleton and Meghan Markle to Hollywood royalty, like Katie Holmes and Chrissy Teigen.
This content is created and maintained by a third party, and imported onto this page to help users provide their email addresses. You may be able to find more information about this and similar content at piano.io
Advertisement - Continue Reading Below
More From Celebrity
The Queen Has a Rule Against Bad Talking Family
The Queen Took a Pic of Philip With Her to Funeral
Advertisement - Continue Reading Below
The Queen's Tolerance Was the Key to Her Marriage
J.Lo "Likes" Shady IG Post After A-Rod Split 👀
Beyoncé Shares Photos of Her White Power Suit
Will & Kate Welcomed Harry Back Into Their Group
Queen Left a Handwritten Note on Philip's Coffin
The Queen Said Grief Is the Price We Pay for Love
All of the Photos from Prince Philip's Funeral
The Queen Wore This Brooch to Philip's Funeral