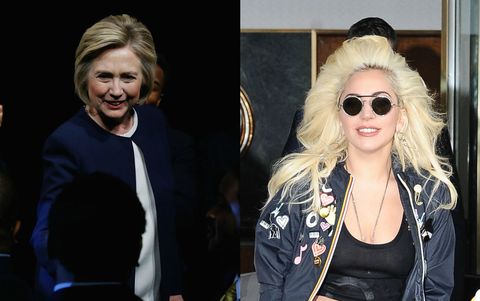 Stars like John Legend, Kris jenner, and other celebrities have been sharing their Mother's Day tributes and memories all day long.

But Lady Gaga's Mother's Day message is a little more wishful. After tweeting out a supportive message to Kesha who performed Gaga's song 'Til It Happens to You,' the award-winning  actress and singer wished a very special Mother's Day to presidential candidate Hillary Clinton. She wrote, "Happy Mother's Day @HillaryClinton. This country needs a mother and you're it." Mother Monster followed up her message to her would-be Mother America with #HillaryBeOurMama plus a prayer hands and heart emoji.

Happy Mother's Day @HillaryClinton. This country needs a mother and you're it. 🙏🏽❤️ #HillaryBeOurMama

As expected with any political statement made on social media, the response has been hugely divisive with Trump and Sanders supporters jumping in to attack Gaga and Clinton with Hillary supporters coming fiercely to her defense.

But Lady Gaga has never been one to shy away from controversy, so we think she can handle it.

This content is created and maintained by a third party, and imported onto this page to help users provide their email addresses. You may be able to find more information about this and similar content at piano.io
Advertisement - Continue Reading Below
More From Celebrity
Gaga Stuns in a Wedding Dress for 'House of Gucci'
Prince Harry Is Quarantining at Frogmore Cottage
Advertisement - Continue Reading Below
Meghan Markle Expresses Sympathies to the Queen
Prince Harry Remembers Prince Philip
Prince William Statement on Prince Philip's Death
Meghan and Harry Are Facing Security Threats
Selena Gomez Is Drenched in Fake Blood on Set
Amanda Seyfried Talked About Having Panic Attacks
Harry Arrives in the U.K. For Philip's Funeral
Matthew Perry Deletes 'Friends' Reunion Instagram