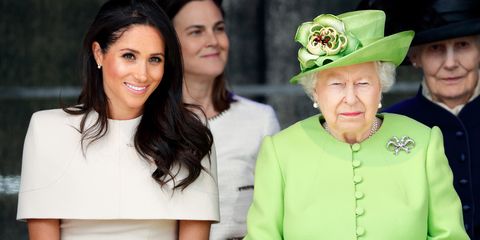 In this week's dose of Thomas Markle Wants Attention, the Duchess of Sussex's father, Thomas Markle, has decided to drag the Queen for agreeing to meet Donald Trump before him. Confused? Same.

Let's back up: After Meghan's dad went on Good Morning Britain for a telling interview earlier this month (you know, the one where he talked about Meghan's desire to have children, how it felt to miss his daughter's wedding, and a slew of other private matters), Markle claims the royal family has since put him in a "penalty box." Markle told TMZ that he hasn't spoken with anyone from the palace (including Meghan) since the interview dropped—and he really doesn't like it.

Projecting his frustration onto the Queen (a decision that will definitely make the royal family happy), Markle says the matriarch's choice to meet Donald Trump—and not him—is a mistake. “If the Queen is willing to meet our arrogant and insensitive president she has no excuse not to meet me, I’m nowhere near as bad," he told TMZ.

WORLD EXCLUSIVE: Thomas Markle talks about his heart surgery and the moment he told Meghan he couldn’t attend the royal wedding #GMB pic.twitter.com/oIpPjPbd6u

The Queen will reportedly meet Trump during his visit to the UK next month—and while details have yet to be released, one thing is for sure: There is no way in hell that Thomas Markle will have his moment with the Queen before then (and maybe ever).

Related Story
Meghan Markle Will Join the Queen Again Soon
Ruby Buddemeyer Beauty Editor Ruby is the beauty editor at Cosmopolitan, where she covers beauty across print and digital.
Advertisement - Continue Reading Below
More From The Ultimate Guide to the Royal Family
Meghan Is Serious About Her Quarantine Precautions
Will Says COVID-19 Is a 'Life and Death Fight'
Advertisement - Continue Reading Below
Sussexes Make Top Hire for New Charity Venture
Inside Harry & Meghan's First Days in LA
Meghan & Harry Reconcile With the Royal Family
Why Kate & William Are Keeping a Low Profile
Your Official Guide to the Royal Family's Tiaras
The Cambridge Children Clap for Healthcare Workers
Meghan Markle Is Narrating a Disney Documentary
Meghan and Harry Might Get New Last Names