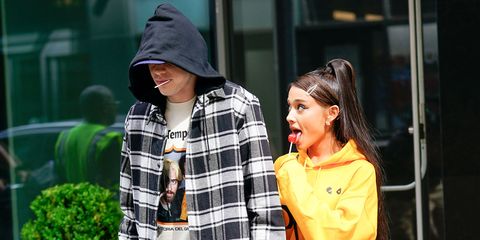 The most extra celebrity romance of the year just got even more very. Ariana Grande and Pete Davidson have had the definition of a whirlwind romance, so the couple's latest love-filled gesture honestly isn't even surprising.

Ariana post a video on her Instagram Story of herself dancing with an adorable animal filter. It doesn't take eagle eyes to notice that another face intermittently gets filtered as well—Pete Davidson's. But no, it's not because Pete jumped into the frame for a cute couple moment. It's because his face is on Ariana's sweatshirt, a la those wonderfully cheesy picture sweaters you use to buy your mom at mall kiosks in the '90s. You know, those.

“this is what @dougmiddlebrook is blasting over the apartment sonos #taste,” she captioned the clip.

Adorkable romantic gestures documented on social media are nothing new for the couple, who got engaged after just a few weeks of knowing each other and now live together. Before their quickie engagement, Pete turned to Los Angeles-based tattoo artist London Reese for not one, but two Ariana tribute tattoos.

Pete got Ariana's iconic Dangerous Woman bunny mask inked behind his ear and her initials tattooed on his thumb.

Pete later got a third tattoo inspired by his fiancée. Tattoo artist, Jon Mesa, co-owner of No Idols tattoo shop in New York City, opened up about inking the Saturday Night Live star with the word "Reborn" in honor of the huge changes his undergone since meeting Ariana.

"They are just riding that magical wave of bliss together," Mesa said. "It’s obvious that Pete is super in love with Ariana."

On that note, watch Ariana's full dance clip, complete with Pete sweater, below: