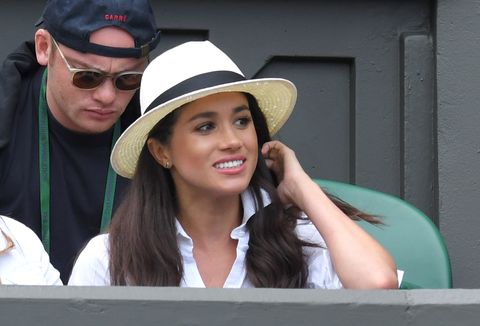 Today in people talking about Meghan Markle, a friend of Prince Charles' has apparently called the Duchess of Sussex's family "frightfully common." Ouch.

The friend in question, Nicky Halsam (an interior designer described as an "old friend" of Prince Charles and Camilla by Independent), said of Meghan's family, "They’re frightfully common. It would have been awful if that huge lump [referring to Meghan’s father, Thomas Markle] had been there."

Halsam could have just dropped the mic and walked away there, but he kept going, speculating on how the royal family is dealing with the Markle family's antics and clarifying that Meghan's mother, Doria Ragland, is not common—although obviously the world already knew that.

"The royals probably don’t quite know how to deal with them," Halsam added. "One person who wasn’t common was her mother."

Halsam also took the opportunity to comment on Meghan's wedding dress, as if that's his place at all.

"I didn’t very much like her dress," he told the Daily Mail. "It didn’t fit, among other things. It should have been made of thinner stuff, it seemed to be made of concrete."

It's worth noting that Halsam was not actually at the royal wedding and formed these opinions while watching from home, like the rest of us, well, commoners.

For what it's worth, however, the royal family is reportedly frustrated with Thomas Markle's after his recent round of interviews and that Meghan hasn't spoken to her father since the day after her wedding to Prince Harry.

"Thomas adores his daughter and swears he never wanted attention from the interviews," a source close to Thomas Markle told Us Weekly. "All he’s ever cared about is protecting Meghan. He wants the royals to stand by his side, but of course so far they haven’t."