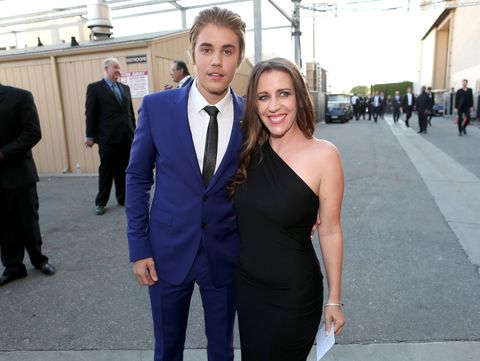 Justin Bieber's mom, Pattie Mallette, might need a sweater considering all the shade she's standing in. The singer's mom grabbed fans' attention today when she edited her Twitter bio to remove the reference to Justin.

Here's a screenshot of Pattie's Twitter bio from January of this year, before the edit, courtesy of Archive.org:

Pattie's old bio read: "Yes, Justin Bieber is my son. I have many other great qualities besides being his mom haha! No really. #LoveWins #LOVEARMY."

Here's a screenshot of her Twitter bio as it stands today:

Pattie's updated bio cut all references to Bieber and motherhood. Now, it simply reads, "#LoveWins #LOVEARMY," because hashtags (and deleted references to your child) are worth a thousand words?

"Before proposing to a woman they’ve only known for a few weeks, I think the final guys on The Bachelorette should come help me scrub my kid’s diarrhea out of my living room rug just to make sure they’re serious about the whole 'I want a family with you' thing," Lowe tweeted.

Fans are DISTRESSED by this development.

pattie really liked this tweet. SHES DEFINITELY SO MAD AT JUSTIN. ohh my god. smh @ him, won’t even listen to the woman that raised him. if pattie’s woke, half of this fandom should too... https://t.co/7PHM9IIXdb

Some fans are convinced that this is proof that Justin's mom disapproves of his engagement.

Two of the most religious & kind people that helped him through a bunch of shit DON’T approve or think it’s a good idea. That speaks volumes.

Others are like, "People update their Twitter bios. It's a thing that happens. Chill and stop reading into it."

Pattie has a pic of her hugging her son as her twitter header. A track pic from Justin's Purpose album is her pinned tweet. She "liked" Hailey's engagement-related tweet, and there's no reason why she wouldn't claim her son. Everyone updates their bio. 😂 https://t.co/AvsrHBPDRe