As well as running a cosmetics empire, quietly becoming an almost-billionaire, and raising her first child, Kylie Jenner has found time to make a quick cameo in boyfriend Travis Scott’s new music video. The visuals for his track “Stop Trying To Be God” feature the reality star as some kind of golden goddess. I knew she loved a glow-y highlight, but this is next level.

The video makes endless biblical references and pitches Kylie as the modern-day Virgin Mary—if the Virgin Mary had worn a bedazzled bodysuit and a sleek up-do while doing her thing. Her first appearance shows the new mom looking like liquid gold, radiating sunlight as she does as any good girlfriend would, and tends to her rapper boyfriend after he’s been set alight. Truly unfortunate.

Later, Kylie appears again. This time, she’s covered in glimmering sequins and wearing a gold gown by AMEN, as she chills in a stable and calmly tends to a lamb in a manger.

Strangely, Jenner herself has made no mention of her appearance in the video across her social media yet, but she has already shown her support for Scott’s new album, Astroworld, by posing in the merch t-shirt on Instagram. Well, it would be a little awkward if she hadn’t as most of the songs on the record make reference to her, their relationship and their daughter, Stormi. The track “Skeletons” references the early days of their relationship: “We just rocked Coachella, I gave her of half of the check/It was good sex, I didn’t mention to the net/Didn’t pass the loud, that was out of respect.”

In a second song, “Stargazing", the rapper (real name Jacques Webster) sings: “But she know my baby mama is a trophy/ She be throwing up them B’s feel like we both bleed.”

It’s no Kim and Kanye in “Bound 2”, but if this means that the Kardashian Christmas card is finally going to feature the family in full nativity costume this year, I’m here for it. 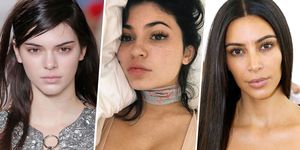 What the Kardashians Look Like without Makeup
Lucy Wood Contributor Lucy Wood spends most of her time writing about celebby things, reading books, and waiting for the glorious day that she have enough millions for a pet sloth.
This content is created and maintained by a third party, and imported onto this page to help users provide their email addresses. You may be able to find more information about this and similar content at piano.io
Advertisement - Continue Reading Below
More From Celebrity
Gwen Stefani Is Unrecognizable In New Insta Post
Lady Gaga Wore Serious Platform Heels in Rome
Advertisement - Continue Reading Below
North West's Pet Lizard Has Its Own SKIMS
Is Harry & Meghan's Archewell Update a Royal Diss?
Why Is the Royal Family Called "The Firm?"
Meghan Says Palace Is “Perpetuating Falsehoods"
Twitter Blasts Media's Targeting of Duchess Meghan
Palace Is Looking Into Meghan Bullying Allegations
Meghan & Eugenie Are Still Close After Royal Exit
Harry's Oprah Interview Suit Is a Nod to Archie