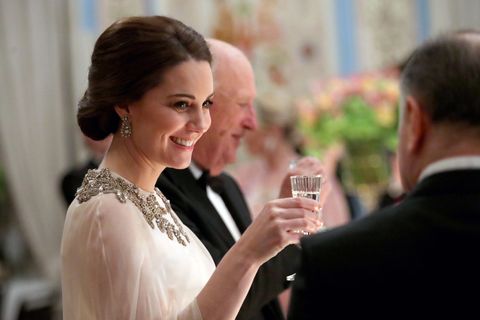 It's hard to imagine Britain with any monarch other than Queen Elizabeth II. Her Majesty has reigned for 65 years—the longest reign of any monarch in British history. But, some day Prince Charles will inherit the throne and, after him, it will be Prince William's turn.

As anyone who has seen the first season of The Crown knows, royal coronations are a whole thing. When the day comes for Will to step up and become King, he'll be celebrated with a huge, elaborate coronation ceremony. When William becomes King, his wife, Kate Middleton, will become Queen Consort. She'll also have a coronation ceremony, but hers will be much, much more low-key.

The reason? That's just how the royals do things, apparently. According to the royal family's official website, "Unless decided otherwise, a Queen consort is crowned with the King, in a similar but simpler ceremony."

This does mean, of course, that William and co. could decide to honor Kate with a huge ceremony of her own. But they could also just...not. It's not like this would be likely to upset Kate either way.

First of all, she's known for being a very down-to-earth, low-key person in general, so she might not even want all the pomp and circumstance of a huge coronation anyway. And, even if that's a thing she's secretly dying to experience, the royal family's stance on the whole situation is pretty clear, so at the very least she's been prepared for her "similar but simpler" ceremony for years now.

This content is imported from {embed-name}. You may be able to find the same content in another format, or you may be able to find more information, at their web site.
Kayleigh Roberts Contributor Kayleigh Roberts is the weekend editor at Marie Claire, covering celebrity and entertainment news, from actual royals like Kate Middleton and Meghan Markle to Hollywood royalty, like Katie Holmes and Chrissy Teigen.
This content is created and maintained by a third party, and imported onto this page to help users provide their email addresses. You may be able to find more information about this and similar content at piano.io
Advertisement - Continue Reading Below
More From The Ultimate Guide to the Royal Family
Will and Kate Attend the ‘No Time to Die’ Premiere
Harry Carries Briefcase That Reads "Archie's Papa"
Advertisement - Continue Reading Below
Meghan Markle and Prince Harry Arrive in NYC
Princess Beatrice Has Given Birth to a Baby Girl
How Meghan & Harry Spent Their 2-Year Anniversary
Charlotte Has Two Major Milestones Coming Up
Kate Made a Very Common Shoe Shopping Mistake
The Queen Is Lawyering Up, Apparently
Harry & Meghan Are Still Close to the Queen, TYVM
Archie Inspired Harry and Meghan to Take a Stand