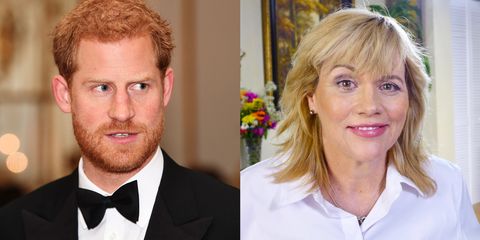 On Saturday, Prince Harry celebrated his 34th birthday. Meghan Markle's estranged half-sister, Samantha Markle, took the occasion as a chance to dig in and make the gulf between Meghan and her dad's side of the family a little wider.

Related Story
Everything We Know About Meghan Markle's Family

In a tweet sent from her private account, Samantha went after Prince Harry, calling him out for not wishing Meghan's estranged father, Thomas Markle, a happy birthday in July.

"Happy Birthday Harry!," Samantha wrote. "As you 'mack down' on your birthday cake, think about the birthday wishes you never extended to your father-in-law."

She also attached a GIF of a hamster housing a birthday cake, just to add a little oomph to the insult (although, the GIF is mostly just adorable, so not sure if it had the desired effect).

This is just the latest in a long line of brutal messages Samantha has posted to social media railing against Meghan and the royal family. In July, when Meghan and Harry visited the Nelson Mandela Centenary Exhibition in London, she also criticized the couple for not pay enough attention to Thomas Markle.

“How about you pay tribute to your own father?! Enough is enough. Act like a humanitarian act like a woman! If our father dies I’m holding you responsible, Meg! @KensingtonRoyal," she tweeted at the time.

Meghan hasn't been on social media since she became engaged to Harry (and therefore wouldn't necessarily see the messages at all), but that didn't stop Samantha from continuing her tirade.

"Glad you have so much time to gallivant around paying tribute to others while ignoring your own father! How cold can you be and look in the mirror? Harry? I guess I was right."