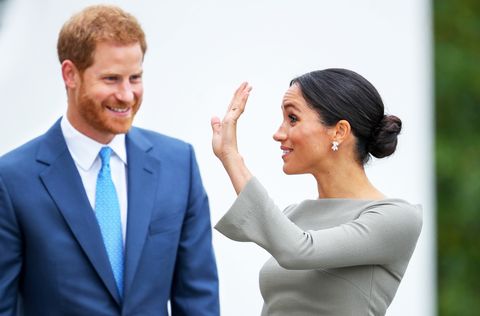 Being a royal couple certainly has it’s logistical difficulties, but one of the trickiest elements of Meghan Markle and Prince Harry’s new married life as the Duke and Duchess of Sussex must surely be juggling their social events calendar. While the rest of us struggle to remember when we’ve arranged to have a movie night, they’re making different public appearances across the world every other day.

So it’s no huge surprise to hear that Meghan and Harry have awkwardly double-booked themselves for two fairly major events, and now won’t be able to attend Prince Charles’ huge 70th birthday party, taking place on October 25.

As Vanity Fair noted, Charles (with some help from wife Camilla, Duchess of Cornwall), is throwing a special concert and dinner at Buckingham Palace to mark his milestone age, with a party three works before his actual birthday, November 14. Unfortunately, son Prince Harry and wife Meghan won’t be RSVPing a ‘yes’ for the event, as they’ll inconveniently be on the other side of the world. The party has been planned for the same time that the couple embark on their first royal tour, and they’re actually scheduled to be in Nadi, Fiji and Nuku’alofa, Tonga on Thursday 25 October. Potentially a little far to fly back for your dad’s concert.

Luckily, Meghan and Harry needn’t feel too guilty about missing Charles’ celebrations, as they will be back in the UK for his actual birthday. Plus, shortly after their wedding, the couple made sure to delay their honeymoon plans in order to attend a garden party held in the Duke of Wales’ honor, which surely banked them a few bonus points.

“It’s going to be a very special night and Charles is very much looking forward to it,” a source told Vanity Fair. “Harry and Meghan can’t be there because they will be overseas. It’s why they were so keen to be at the garden party for Charles back in May.”

While the Duke and Duchess of Sussex are otherwise occupied, the Duke and Duchess of Cambridge will be in attendance for the party, with Kate Middleton due to return to her royal work from maternity leave next month. The rest of the invitations were reportedly sent out last week to the close friends and family of Prince Charles, and guests can look forward to an evening of music, opera, ballet and Shakespearean drama.

Hmm, Shakespearan drama with the fam, or a trip to Tonga? Decisions, decisions…

Related Story
Shop Every One of Meghan Markle's Best Looks
Lucy Wood Contributor Lucy Wood spends most of her time writing about celebby things, reading books, and waiting for the glorious day that she have enough millions for a pet sloth.
This content is created and maintained by a third party, and imported onto this page to help users provide their email addresses. You may be able to find more information about this and similar content at piano.io
Advertisement - Continue Reading Below
More From The Ultimate Guide to the Royal Family
Why Harry's Memoir Release Date Has Upset People
The Royals Are Worried About Prince Harry's Memoir
Advertisement - Continue Reading Below
Harry Is Putting the Queen in a Difficult Position
Are Will & Kate Sending a Message to Harry & Meg?
Harry and Meghan Reportedly Have a Four-Book Deal
Rare Photos From Diana and Charles' Wedding
Prince George Looks So Grown-Up in New Portrait
Whatever Happened to Archewell Audio?
Prince Harry Is Set to Publish a Memoir
For Prince George Turning 8 Is a Fashion Milestone