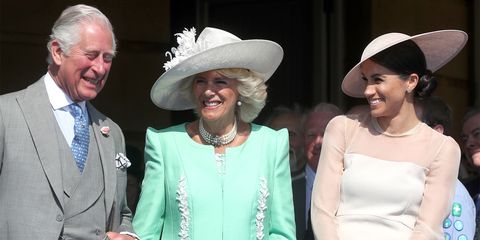 The royal family have made it abundantly clear that they are pro-Meghan Markle. She's even famously forged a close bond with Queen Elizabeth. Just look at them. Thick. As. Thieves.

Meghan has also won over another very important member of the family in a big way: Prince Harry's dad, Prince Charles. A family member recently told Vanity Fair that Charles is "closer to Harry than ever" — and it sounds like Meghan is behind their newly-restrengthened bond.

Related Story
Harry and Meghan Vacation with Charles and Camilla

"The wedding was a real turning point," the family member explained. "Charles showed so much love towards Harry and Meghan, and I think Harry will be eternally grateful to his papa for stepping in and giving Meghan’s hand in marriage. The bond between them is very close."

Even though Charles and Meghan have always gotten along well, according to reports (he even walked her down the aisle on her wedding day), they seem to have grown even closer during a recent vacation to the Castle of Mey in Scotland. The castle, which has been in the royal family since 1952, is a favorite of Charles', but apparently not of other members of the royal family; Princess Diana reportedly hated Scotland and Charles' current wife, Camilla Parker Bowles, rarely spends more than a few days at the castle with him.

Harry and Meghan, however, stayed at Mey with Charles for almost a week and it's fair to say it went well. Charles is speaking even more highly of Meghan than ever—which is saying something.

"Charles has been very supportive of Meghan and everything she is going through with her own father," the royal family member said. "He’s got a real soft spot for her and thinks she’s the best thing to have happened to Harry."

This content is imported from {embed-name}. You may be able to find the same content in another format, or you may be able to find more information, at their web site.
Kayleigh Roberts Contributor Kayleigh Roberts is the weekend editor at Marie Claire, covering celebrity and entertainment news, from actual royals like Kate Middleton and Meghan Markle to Hollywood royalty, like Katie Holmes and Chrissy Teigen.
This content is created and maintained by a third party, and imported onto this page to help users provide their email addresses. You may be able to find more information about this and similar content at piano.io
Advertisement - Continue Reading Below
More From The Ultimate Guide to the Royal Family
Will & Kate's Modern Approach to Raising George
Why Harry's Memoir Release Date Has Upset People
Advertisement - Continue Reading Below
The Royals Are Worried About Prince Harry's Memoir
Harry Is Putting the Queen in a Difficult Position
Are Will & Kate Sending a Message to Harry & Meg?
Harry and Meghan Reportedly Have a Four-Book Deal
Rare Photos From Diana and Charles' Wedding
Prince George Looks So Grown-Up in New Portrait
Whatever Happened to Archewell Audio?
Prince Harry Is Set to Publish a Memoir