Amongst the celebrity guests who showed up for the red carpet earlier this week, Ariana Grande and fiancé Pete Davidson were notably absent from the Emmys 2018 ceremony, despite a scheduled appearance. Later, the singer’s representatives confirmed that she would be taking a step back from the spotlight for some time, in order to “heal and mend” following a difficult year.

As well as openly admitting she struggles with anxiety and PTSD relating to the Manchester attacks at her concert in May 2017, Ariana also recently lost ex-boyfriend and loved one Mac Miller, following his tragic and unexpected death at the age of just 26 earlier this month. Now, it seems that Ari is learning to dance through the rain in more ways than one, as she was spotted out in public on Tuesday for the first time since the heartbreaking loss of Mac.

Ariana walked with friends through New York City, dressed casually in one of her signature oversized sweaters, plus rolled-up track pants and a cute space bun hairstyle. At one point, the No Tears Left To Cry star sweetly skipped through the NYC wet weather. While still not looking quite herself, she seemed to at least be in good spirits and finding comfort in friends.

While spending time with close pals is clearly helping Ariana to overcome a difficult time, fiancé Pete has also of course been on hand to help her through it. The engaged couple, having maintained privacy together, have started their very own family at home this week—but probably not in the way you’re thinking. They adopted an adorable pet micro pig named Piggy Smallz, who now even has his own tribute tattoo on Pete’s torso.

It’s reassuring to see Ariana finding happiness in small moments, despite everything she’s been through recently. 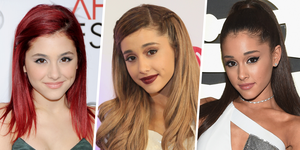