Kate Middleton might be a perfect Disney princess come to life, but even she still needs a little down time every now and again. More recently, fans of the royal family have seen less of the Duchess of Cambridge than usual, as she’s been on maternity leave after giving birth to her third child, Prince Louis. With a 5-month-old baby, plus five-year-old Prince George and 3-year-old Princess Charlotte to keep an eye on, it was no real surprise to hear that Kate wouldn’t be joining husband Prince William on his current royal trip.

William’s latest adventure took him to Africa, where yesterday, he gave a speech at a British High Commissioner’s reception in the capital city of Namibia, Windhoek. The Duke of Cambridge gave a sentimental shout out to his family back home, and confessed that, although she has a lot on her plate already, wife Kate was still “immensely jealous” that she couldn’t accompany him to Africa this time.

Although on the other side of the world, William made it clear that his family weren’t far from his thoughts during the trip. Making a rare, heartfelt comment about his wife and children, the Prince said: "I'm delighted to be visiting Namibia for the first time. I am only sorry that my wife Catherine is not able to join me."

“My visit to Namibia this week is focused on conservation. This is an issue very close to my heart, and I know is a matter of deep pride to you all as well.” — The Duke of Cambridge, at a British High Commissioner’s reception in Windhoek 🇳🇦🇬🇧 pic.twitter.com/hEFQQxtsAk

“She is immensely jealous,” he went on to admit. “Particularly as I am looking forward to a few good uninterrupted nights' sleep this week, away from my wonderful children.”

William’s current time in Africa focuses on his continued work against illegal wildlife trade. "My visit to Namibia this week is focused on conservation,” he explained later in the speech "It’s an issue very close to my heart and I know is a matter of deep pride to you all as well. Your country is famous for its beautiful environment and its wildlife."

“Whatever approach we take to #EndWildlifeCrime, it must be based on evidence of what works on the ground with local communities.” — The Duke of Cambridge. pic.twitter.com/QI4D3uNfDM

While Kate is fulfilling the doting mother role back home, Kensington Palace has confirmed that the Duchess will soon be returning to work in the fall, which may include a reported solo campaign. According to The Daily Mail, Kate's campaign will focus on disadvantaged children, and will aim to help them avoid addiction and mental health issues as they grow.

A great and hugely worthy cause, Kate—but maybe start a side project that revolves around dream vacation destinations, too? 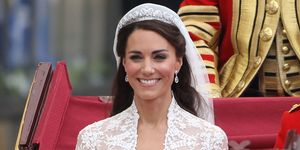 All the Times Kate Middleton Has Worn a Tiara
Lucy Wood Contributor Lucy Wood spends most of her time writing about celebby things, reading books, and waiting for the glorious day that she have enough millions for a pet sloth.
Advertisement - Continue Reading Below
More From The Ultimate Guide to the Royal Family
Royals Share Rare Look Into Palace Refurbishment
Margot Robbie Invites Meghan & Harry to Dinner
Advertisement - Continue Reading Below
The Royals' Website Accidentally Linked to Porn
Kate Says Will Felt Helpless During Pregnancies
Kate Shares Never-Before-Seen Picture of Charlotte
Meghan Markle and Prince Harry Pictured Together
Kate Calls Post-Birth Photo Call 'Terrifying'
Sussexes Made Secret Visit to Stanford University
Harry & Meghan Are *Feeling* Each Other Right Now
Kate Opens Up About Parenting in Rare Interview