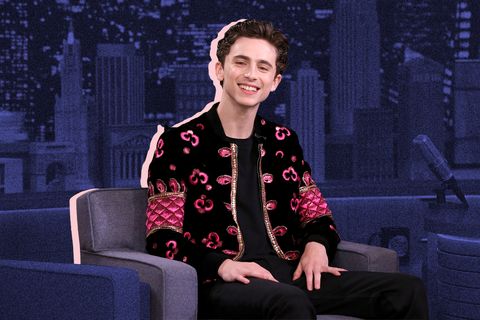 Hello, speckled mousebirds, and welcome to another edition of This Week in Timothée Chalamet. A very happy Beautiful Boy day to each and every one of you, for unless you are new here (oh my god, hi, by the way!) you know that we have been looking forward to the wide release of this film for many, many months. And today is the day!

To get you up to speed (and, again, thank you so much for stopping by our humble column), Beautiful Boy is about a father’s relationship to his son and how it warps and evolves as the son—played by Timmy—battles drug addiction. The film, which co-stars Steve Carrell as the dad, is based on the respective memoirs by David and Nic Sheff, the father and son in question. Some people think Timmy may win an Oscar for this film, which would be momentous.

It’s bound to be a real tear-jerker, which is a relief because I was actually just thinking that I don’t cry enough in 2018. (Just kidding, I cry literally every day. Usually on the subway. It’s fine. Please vote.)

Before we all run off and go see it, let’s take a look at what else our beautiful boy was up to this week.

Timmy was on The Tonight Show!

One of the best things about Timothée Chalamet is that he seems completely astonished that he’s not only famous but well-respected and heartthrobby. I can’t help but believe his confused bashfulness is not something he’s just putting on, in the way that, say, Jennifer Lawrence spent years pretending to be a doofy stoner-girl and then dated Darren Aronofsky—which, speaking as a doofy stoner-girl, is something we simply would not do.

For proof that Timmy is the genuine article, I turn your attention to his appearance on The Tonight Show Starring Jimmy Fallon (justice for Conan [yes, still!]), in which he keeps repeating that he’s nervous and that coming on the talk show is not any easier the second time.

Some revelations from this interview:

—His mom and sister got in a fight at the Oscar broadcast.

—His parents told him not to cancel their DVR downloads.

—He has been informed about @chalametinart, which we clocked a really long time ago. He said it was, “so weird. But it’s cool, and I’m grateful to whoever is doing that.” Sweet, sweet boy.

—He can’t do Photoshop.

—He seems genuinely committed to shining a light on the addiction crisis in America and shattering stigmas in order to help people. (Sorry to get all serious for a minute in this otherwise absurd column, but this is a very real problem and props to Timmy for making this about more than himself.)

He wore a red outfit!

Do you remember back in February when Timmy was interviewed by Frank Ocean for Interview Magazine? The Q+A itself is almost criminally dull, but there was this:

FO What’s the fit going to be for the SAG Awards?

FO We’re giving Raf [Simons] this evening. I love it.

TC I’m such a fanboy. [Being involved] with fashion has been really fun, just as a fan. I don’t want to work with a stylist or anything. I’ve been following designers like Raf, Haider Ackermann, Hedi Slimane—these guys are like rock stars. They’re artists.

Blech. But the key takeaway here is that Timmy doesn’t use a stylist, which is an important piece of information because at the Beautiful Boy premiere, he donned this little red number:

Interesting. Now, I’m not here to say who wore it better—I think they both look fantastic—but I'm just saying, Timmy, if you had a stylist...maybe you would not have worn the same outfit as Jamie Lee Curtis.

Anyway, it made some people really happy:

Good thing gender is a construct!

I love when Timmy is active on the socials, and he’s been on a tear (relative to his complete silence right as this column was really starting to take off—thanks so much, Tim) lately. The best one is this pic of him and Steve Carrell, in which he wrote a long caption describing a TIME article about Beautiful Boy as the piece that “best describes what the movie is about.”

Elsewhere, he posted two pics from his Time Out London cover shoot:

Favor! Can one of you cuties in the UK send me a copy? You know I never ask for anything and I will be your best friend.

Anyway, probably more happened but I am actually volunteering to get out the vote so I am going to go do that instead. You should too, so check out where you can help out in your neck of the woods at this link here! Then let’s reward ourselves with a viewing of Beautiful Boy. Sound good? Great!