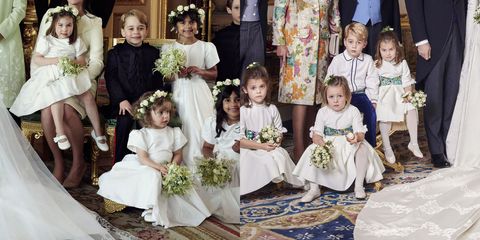 By now, you have to know that there was a royal wedding on Friday, right? Princess Eugenie married her longtime boyfriend Jack Brooksbank in a beautiful wedding at St. George's Chapel in Windsor and it was predictably incredible.

The guest list included royalty, celebrities, and several hundred lucky members of the public. After the wedding ceremony, the couple and their guests headed off for a private reception at St. George's Hall in Windsor Castle, where they drank Casamigos Tequila, dined on Eugenie's incredible fall-themed chocolate wedding cake, and posted pictures and videos in spite of the reported strict social media ban. YOLO, right?

In between the wedding ceremony and the epic party (make that parties, plural, actually, because Eugenie's wedding was a two-day affair that continued Saturday with an outdoor festival), Eugenie, Jack, and a bunch of their loved ones found time to sneak away to snap her official wedding portraits.

The first photo includes members of both Eugenie and Jack's families and features Queen Elizabeth II and Prince Philip, her parents, Prince Andrew and Sarah Ferguson, her older sister, Princess Beatrice, and Jack's parents, George and Nicola and his brother, Thomas Brooksbank. The second focuses on Eugenie, Jack, and their pint-sized wedding party.

The most famous members of said party? The son and daughter of Eugenie's older cousin, Prince William: Prince George and Princess Charlotte. George and Charlotte are in high demand when wedding season rolls around and have served as a pageboy and bridesmaid in several weddings this year alone, including Prince Harry and Meghan Markle's May wedding.

Like Eugenie and Jack, Harry and Meghan also posed for a second portrait with just their bridal party.

Unlike Eugenie and Jack, Harry and Meghan got down on the ground and really in the middle of their herd of tiny pageboys and bridesmaids.

The energy in the two photos is very different and so are the faces that George and Charlotte made in each set of royal portraits. Let's compare. Here's a close up of them in Harry and Meghan's big family shot. Charlotte looks exhausted (probably from all the energy she spent stealing the show with her cute waves) and George looks elated:

And here's a close up of them in Eugenie's big family portrait, in which they look, well (sorry, Eugenie!) like Hansel and Gretel after they've been taken hostage by the witch:

And as for those kid-focused shots, George and Charlotte were separated in Meghan and Harry's portrait, but both looked downright elated:

We'll have to wait for the next royal wedding (Beatrice, perhaps?) to see how George and Charlottes lewks evolve next. 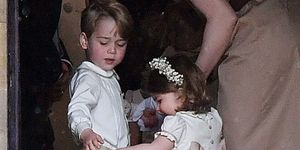