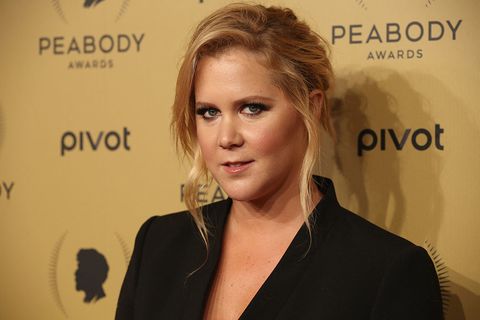 Amy Schumer will star in a live-action Barbie movie, which is a real thing that Sony is really producing. According to Deadline, the premise of the movie is that the main character — and Schumer's role — gets kicked out of "Barbieland" for not being perfect enough, and ends up stuck in the real world (just like Amy Adams in Enchanted, except probably with more cussing). Her adventures in reality teach her that perfection comes from within, and she returns to Barbieland just in time to save it with her newly empowered views. No, really.

Schumer and her sister Kim Caramele are also apparently planning to rewrite the movie's script from an original draft by Hilary Winston (who's worked on TV shows like Community and My Name is Earl). The Barbie movie has actually been in development since early 2014, when Sony made the initial deal with Mattel.

Emma Dibdin Contributor Emma Dibdin writes about television, movies, and podcasts, with coverage including opinion essays, news posts, episodic reviews and in-depth interviews with creatives.
This content is created and maintained by a third party, and imported onto this page to help users provide their email addresses. You may be able to find more information about this and similar content at piano.io
Advertisement - Continue Reading Below
More From Celebrity
Who Is Alev Aydin, Father of Halsey's Child?
Surprise—Halsey Is Pregnant With Her First Child
Advertisement - Continue Reading Below
Um, Why Is the Weeknd's Face Bloody and Bandaged?
Your First Look at Kristen Stewart as Diana
47 'Friends' Facts Every Superfan Should Know
Eugenie Shared a Rare Candid Snap With Her Husband
Why Serena Didn't Want Olympia to Play Tennis
J.Lo Talked Botox Claims: "Don't Call Me a Liar"
Kate Has Her Own Direct Line to the Queen
Megan Thee Stallion’s Hottie Bootcamp Is Intense