Today's Top Stories
1
Priyanka Pulls Back the Curtain
2
Could This Be the Last Year of Roe v. Wade?
3
What to Buy From Madewell's Secret Stock Sale
4
Jaclyn Rothenberg Pursues Pantsuits In Every Color
5
Listen to the Best New Love Songs of 2021 (So Far)
Getty Images

You’ve heard of Bring Your Kids To Work Day, but Nicole Kidman just took the concept to a whole new level. The actress was urged by Ellen during her latest appearance on The Ellen DeGeneres Show to spill a few secrets about the upcoming second season of Big Little Lies, and Kidman revealed that she’s keeping it in the family for series two.

Kidman, who plays Celeste Wright on the hit HBO show, dropped the behind-the-scenes secret to Ellen that two of her daughters, Sunday, 10, and Faith, 7, will make cameos in the new season. It sounds like it could be a case of ‘blink and you’ll miss ‘em’ though, as both of her girls will appear unannounced in the background of an unnamed episode.

“[My kids] were in as extras on Big Little Lies,” 51-year-old Nicole shared of her two children with husband, Keith Urban. “I’ve never told anyone. There I am now, being a big mouth.”

It’s not hard to imagine that keeping the exciting secrets of a show like Big Little Lies is never easy. Kidman went on to admit that she and co-star/co-producer Reese Witherspoon are always struggling to keep upcoming plot twists under wraps. "Probably the two of us have a bit of a big mouth,” she confessed. “So we have to watch it. She’s a very good secret keeper! I've told my husband the entire plot line, but you're allowed to do that.”

Nicole’s second co-star, Zoe Kravitz, has also recently shared a few hints about what fans can potentially expect from season two of BLL. While her character, Bonnie, was more of a supporting character in the premiere season, the star has suggested that she’ll be more at the forefront of the drama next time with her own arc. Speaking to Rolling Stone for her recent naked photoshoot interview, Kravitz explained that she was a little disappointed that Bonnie never became more than a "sexy yoga teacher" and "second wife of someone important to a main character".

“There’s more about her in the book, and I was a little bummed we weren’t going to get to explore that,” she said. This time, however, there could be much more to learn about Bonnie. For season two: “They’re not using her to tell someone else’s story. She has her own story." 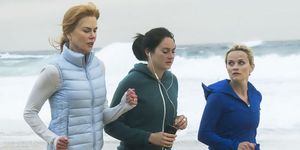 The 'Big Little Lies' Cast Tease Season 2
Lucy Wood Contributor Lucy Wood spends most of her time writing about celebby things, reading books, and waiting for the glorious day that she have enough millions for a pet sloth.
This content is created and maintained by a third party, and imported onto this page to help users provide their email addresses. You may be able to find more information about this and similar content at piano.io
Advertisement - Continue Reading Below
More From Celebrity
Princess Diana's Nieces Opened Up About Their Aunt
Elizabeth Hurley, 55, Shows Off Toned Abs On Insta
Advertisement - Continue Reading Below
Keira Knightley Won't Do Nude Scenes Filmed by Men
Kourtney Kardashian Is Dating Travis Barker
Priyanka Chopra Jonas Talks Her New Memoir
Priyanka and Nick on Their Quarantine Quality Time
Priyanka Pulls Back the Curtain
Sussexes Will Return to Social Media, Harry Said
A-Rod Celebrated J.Lo's Inauguration Performance
The 6 Most Expensive Royal Wedding Dresses