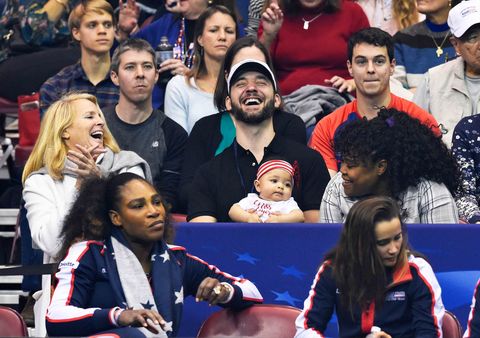 Last Thursday, tennis legends and sisters Venus and Serena Williams faced off on the court during an exhibition match in Abu Dhabi. Venus came out victorious, but Serena brought the real winner along with her: her baby daughter, one-year-old Alexis Olympia.

Alexis Olympia stole the show, cheering for both her mom and her aunt from her place in the stands with her dad, Reddit cofounder Alexis Ohanian. Serena may have lost the exhibition match, but the tennis great clearly knows she won the baby lottery, because she couldn't stop gushing about Alexis Olympia after the match.

"That’s a classy baby, you know, she applauds both Mommy and my opponent who happened to be her auntie,” Serena said of her one-year-old's cheering, according to Sport360. "That was the highlight, seeing her clap, it was so cute."

Ohanian shared footage of the adorable applause on Instagram Friday.

"👏🏻 @olympiaohanian is such a good sport she clapped for every point — whether it was mama @serenawilliams or auntie @venuswilliams," Ohanian wrote in his caption of the incredibly cute video on Instagram.

Watch Baby Alexis' adorable cheers for both her super talented mom and her equally talented Aunt Venus for yourself below:

👏🏻 @olympiaohanian is such a good sport she clapped for every point -- whether it was mama @serenawilliams or auntie @venuswilliams. Video by Bev Gribble

Venus shared the clip on her Instagram Story, along with a caption proclaiming herself Baby Alexis' fave player:

Today, Serena took to Instagram with a Baby Alexis update of her own, sharing a snap of her daughter in the middle of what can only be described as a downright impressive yawn at the airport after the family traveled back from the match in Abu Dhabi.

"#thismama was hoping @olympiaohanian would get some sleep but @realqaiqai kept her up the whole flight. #momlife," she captioned the cute pic.

#thismama was hoping @olympiaohanian would get some sleep but @realqaiqai kept her up the whole flight. #momlife