The richest couple in the world, Jeff and MacKenzie Bezos, are divorcing after 25 years together. The pair made the announcement earlier this week in a joint Twitter statement:

"We want to make people aware of a development in our lives. As our family and close friends know, after a long period of loving exploration and trial separation, we have decided to divorce and continue our shared lives as friends. We feel incredibly lucky to have found each other and deeply grateful for every one of the years we have been married to each other. If we had known we would separate after 25 years, we would do it all again. We've had such a great life together as a married couple, and we also see wonderful futures ahead, as parents, friends, partners in ventures and projects, and as individuals pursuing ventures and adventures. Though the labels might be different, we remain a family, and we remain cherished friends."

The notoriously private MacKenzie Bezos, 48, has made headlines since her husband, Amazon CEO and Founder Jeff Bezos, 54, revealed their divorce news on his Twitter account (MacKenzie doesn't have a Twitter profile). Naturally, the internet is very curious about her—namely because over the years the media has largely relegated her to "Jeff Bezos' wife" and also because she has kept her private life largely private.

Here, everything you need to know about Bezos—who could become the richest woman in the world.

Her first book, The Testing of Luther Albright, came out in 2005 and took 10 years to write, according to a 2013 interview with Vogue. Pulitzer Prize-winning author Toni Morrison, Bezos' mentor while studying at Princeton University, called Bezos “one of the best students I’ve ever had in my creative-writing classes...really one of the best." Her second novel, Traps, debuted in 2013.

The couple met while working at a hedge fund in New York.

MacKenzie interviewed with Jeff in the early '90s. After she started working at the company, they began a romantic relationship (she apparently made the first move) and were engaged after three months of dating. They've been married for 25 (!) years.

Jeff and MacKenzie have four children together: three sons and a daughter who was adopted from China.

She encouraged her husband to start Amazon—and became one of its first employees. 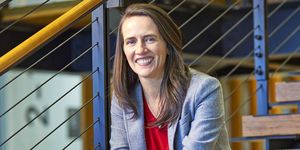 Meet the Woman Behind Amazon's Alexa

Apparently Jeff was still writing his Amazon business plan when they decided to move across the country from New York to Seattle (where Amazon's headquarters are currently located) to pursue this big idea. According to Business Insider, MacKenzie started as an Amazon accountant and negotiated its first freight contracts.

Bezos launched Bystander Revolution in April 2014—"a website offering practical, crowdsourced advice about simple things individuals can do to defuse bullying and help shift the culture." Monica Lewinsky is an ambassador and many celebrities like Lily Collins have been involved with the organization over the years.

She could become the world's richest woman after her divorce is settled.

Yes, that means acquiring more money than Oprah and Queen Elizabeth. (Let that sink in.) Her husband's net worth is currently $137.2 billion, according to Bloomberg. Jeff and MacKenzie apparently didn't sign a prenup when they got married in 1993, a year before Bezos started Amazon. Because they both live in Washington, a community property state, that means any wealth made during the marriage can be split equally. So, right now MacKenzie would receive around $69 billion. (For comparison Oprah is worth $3 billion.) Even if she only received 1 percent, she'd still be a millionaire (though not the richest woman). 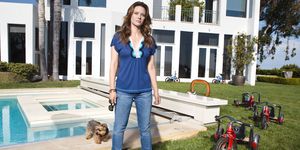